A Deep Hospitality with Migrants and Refugees 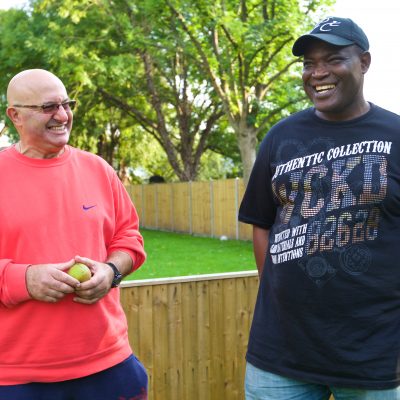 Fr. Damian Howard SJ, the Provincial of the Jesuits in Britain, shares his reflections on the gifts of offering deep hospitality to Migrants and Refugees.

This Sunday the Church marks the World Day of Migrants and Refugees, an opportunity to reflect on our response as Christians to an often vulnerable group of people, and to celebrate the many ways refugees and migrants enrich societies across the world.

This is the 104th such World Day of Migrants and Refugees. It may surprise some of us to learn just how long the Church has been so acutely concerned about the fate of refugees and migrants, especially if we only started taking an interest after Pope Francis’ visit to the island of Lampedusa and all the media attention it aroused.  In fact, Francis’ work for refugees is part of a long tradition established by his predecessors, including Pope Pius XII, who published an encyclical devoted to this matter (Exsul Familia, 1959) and Pope Benedict XVI, who touched on it in his encyclical Caritas in Veritate (2009).

Pope Francis sees in the plight of refugees and migrants today a “sign of the times”. There is something about what is currently happening to refugees and migrants that demands our attention if we are to remain faithful to our calling. That is why his statement for today’s World Day of Migrants and Refugees is aimed not just at those with responsibility for public policy, but at all Christians and people of good will, to remind us all that “every stranger who knocks at our door is an opportunity for an encounter with Jesus Christ, who identifies with the welcomed and rejected strangers of every age (Matthew 24: 35-43)”.

Pope Francis calls on us to love and stand in solidarity with all migrants, and particularly with refugees, at every stage of their journey. He suggests we can do this by welcoming, protecting, promoting, and integrating them.  He explains that welcoming refugees and migrants entails making it easier for them to cross the borders they need to cross, safely and legally. Importantly, the call to extend legal routes also has implications for how we treat those without “correct” documentation. For instance, we should strive to find alternatives to the use of detention – a matter which has particular significance in the UK, which detains around 30,000 people each year.

Protecting means taking concrete measures to defend dignity and rights, including policy and legal measures. That means we should protect migrants by ensuring they can access healthcare.

Integrating focuses on a “culture of encounter” that values and supports the intercultural enrichment brought by migrants and refugees. Integration is carefully distinguished from assimilation, in which host countries seek to remake migrants in their own image. Integration is mutually transformative.

Promoting means empowering migrants and refugees to “achieve their potential as human beings in all the dimensions which constitute the humanity intended by the creator.” It is concerned with human flourishing.

Pope Francis’ approach to this issue is eminently practical, appealing for concrete steps of solidarity, not just warm words or abstract theory.  But he calls us to a praxis that flows from a different way of thinking about human beings – one that flows from a conversion of the heart. Pope Francis challenges the widespread presuppositions of many contemporary cultures, including our own.  He argues against a narrow-minded approach which grounds a person’s worthiness of help on their legal status or nationality; it is their humanity that comes first.

This has long been way the Church thinks about the dignity of migrants. De Pastorali Migratorum Cura (1969) emphasised the rights of the human person in her or his entirety. More recently, Pope Benedict XVI insisted that “Every migrant is a human person who, as such, possesses fundamental, inalienable rights that must be respected by everyone and in every circumstance” (Caritas in Veritate, 62).

Pope Francis’s Message of Hope is a call to holistic love in action, a love that encounters people in the world as it is, and thinks about how to change that world to help them, so we can all flourish together. It is also a call to a love that encounters people as they are, in all of their human dimensions, and on this basis cares about God’s purpose for them and is willing to be transformed by them. It is a call to a deep and reciprocal hospitality.

If we are to take this vision seriously, it evidently has important international and domestic policy implications.

Think of the international debates which have been raging over the last few years about the journeys migrants take. We worry, for example, about boats navigating the treacherous waters of the Mediterranean. Usually, the question for the global community seems to be “how do we stop the boats?” This is not an holistic perspective, for it ignores the fact that they are fleeing from danger. Pope Francis’ call for safer entry points, conversely, suggests we ought to ask a different question: “how do we protect those who are forced to migrate?” This approach will involve making journeys safer. It also involves ensuring that people are protected once they arrive, and that communities in destination countries respond appropriately to migrants’ needs and vulnerabilities.

The need to protect migrants within destination countries is, indeed, a pressing issue here in the UK, and one which the Jesuits in Britain have long been engaged with.  Reading Pope Francis’ words, I am reminded of the community of refused asylum seekers served by the Jesuit Refugee Service (JRS) in Wapping in east London.

JRS UK is a vibrant and growing project, first set up by Brother Bernard Elliot SJ, whose faithful, people-centred approach remains part of its ethos today.  JRS UK runs a day centre for refused asylum seekers. The people I meet there have fled to the UK for protection but can face enormous difficulty in having the validity of their case recognised. The process for determining who is a refugee in the UK is notoriously fraught with difficulty and complexity, underpinned as it is by a culture of suspicion which places a heavy burden of proof on asylum seekers who often struggle to access reliable legal support. Many of those who are initially refused are ultimately recognised as refugees, in need of protection. But this can take years. As they fight for the safety they desperately need, they live in limbo, unable to leave, but also confronted with insuperable barriers to building a life for themselves here. Prevented from working and ineligible for any government support, they are forced into destitution and even street homelessness. They are completely dependent on charity to eat and keep warm. They rarely have space in which to relax, and are forbidden to contribute to society or to develop by working. In sum, refused asylum seekers are denied their dignity, barred from participation in society, and prevented from flourishing in their God-given humanity. And this is all because UK policy understands their worth exclusively in terms of legal status.

This situation raises a pressing question for Jesuits in the UK context: how do we offer deep hospitality to this community? How can we welcome, protect, promote, and integrate?

JRS UK runs a scheme to help communities host destitute, refused asylum seekers over periods of three months at a time. The offer of some emotional and physical safety and space to rest and grow for the refugee hosted is precious. Few would normally have a secure place to stay. Usually, the only way to avoid sleeping on the streets or in night buses is to rely on friends or family. That means a couch, a chair, or the floor of a cold, squalid room which needs to be vacated before anyone else is up. It is not uncommon to find yourself locked out without notice. And so they go from friend to friend with the threat of a night in the freezing cold hanging over them. Several religious communities are taking part in the scheme to offer this deep hospitality by opening their homes to destitute refugees who have found themselves homeless. This kind of hospitality is being offered by many communities of religious sisters and several Jesuit communities, including the one in Mount Street, central London, where I now live. It is a crucial ministry to refused asylum seekers.

The process of hosting refugees within the intimate setting of community life is not always easy; but those who have made this step speak of an enrichment to community life they did not expect.  The refugee guest will teach them something about the grim reality of the world, shifting the conversation by bringing new perspectives to familiar situations.

By welcoming refugees, Jesuit communities and others have met Christ in a new way, the Exile with nowhere to lay His head. This is the truth of the unity of the human family, and sometimes it is only experienced at a deeper level by daring to build bridges across borders, be they cultural, religious, or legal. It is an instance of deep hospitality which has been a gift to those communities who have taken part in it, and just might be a practical a model for helping to transform society across many levels.