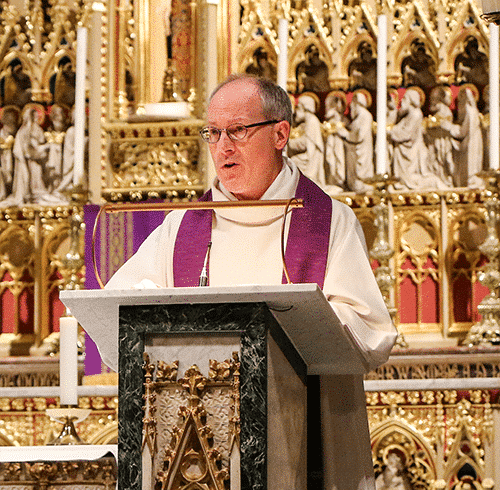 A refugee wisdom which knows the truth about human life 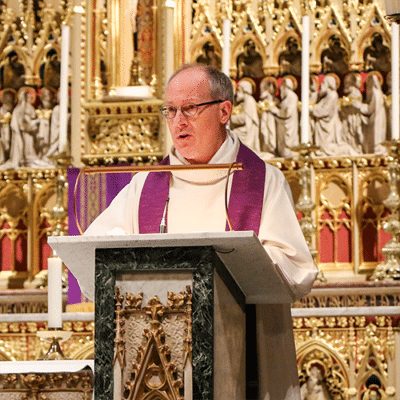 During the second JRS UK Advent Service, Fr Damian Howard SJ, Father Provincial of the Jesuits in Britain,  preached of that refugee wisdom which knows the truth about human life. His complete text for the Homily is below.

There was an Advent party recently in the East End of London. Four random locals found themselves in conversation about the dreadful fix the world was in. Prudently they avoided Brexit, but they didn’t hesitate to bemoan the natural catastrophes afflicting so many corners of the globe, the persecution of entire peoples for their religion or their ethnicity, and, of course, Donald Trump’s latest tweet.

“What’s to be done?” asked one of them. How is the human race to be saved?”

The first to speak up was a local politician, I’ll not say which party she belonged to… “Well, I would appoint a Royal Commission to look into the matter in depth, to listen carefully to all sides, taking evidence from even the most unlikely people. Then you come up with policy recommendations to be implemented over a period of five years and evaluated. By then, I wouldn’t be surprised if there’s some sort of technological solution on offer.”

It was a lawyer who replied. “Good luck with that! You’ll never get everybody to agree with what needs to be done and even if you do the implementation won’t deliver what people said they want. And as for a technological solution… sounds like magical thinking to me. Far better to legislate. People like to know where they stand. They need rules and regulations. Get some bright lawyers together to devise the right legal framework and then motivate people to comply by establishing a system of rewards and punishments. Never fails.”

The advertising executive had been silent so far, but the lawyer’s confidence irritated him so much that he spoke up now. “Rules and regulations never work. People resent them. They hate ticking boxes and meeting targets. You’ve got to get them on your side first, motivate them to want what’s good for the world. It’s not that hard. You just need to come up with the right campaign. You can sell anything if you know how.”

The fourth person had been listening with rapt attention throughout. But now as the conversation paused, she looked pensive and started to share her thoughts. “I like the idea of consulting people to see what they really want. And it’s certainly true that we need laws; otherwise there is chaos, and we all know where that leads. And yes, people need to want the right things too, not just do as they are told. But I think all of you are missing a few key facts.

“When it comes to helping people, timing is everything. You’ve got to wait for the right moment. You can’t just barge in on their lives. People have their rhythms. There are lessons we just can’t learn when we are young; we have to grow up and mature. We just have to wait; there are no short cuts. I’m afraid you will need a lot of patience if you want to save the world.

“And you can’t do everything from on high either. If you really want to change people you’ve got to be on their level, to walk in their shoes, to see life as they see it. Sometimes all you can do to help is to be there. There’s nothing like being a companion to someone to help heal their wounds.

“But if you’re going to travel that road it’s costly. People don’t trust you that easily. They are naturally suspicious of those who say they want to help. You’ve got to disarm them somehow. And that means letting down your own guard, making yourself vulnerable.”

An awkward silence fell over the group. What had started as polite conversation between strangers was getting a little, well, heavy. The politician took a surreptitious look at her watch. “Disarming everyone is a nice idea but who exactly is going to make the first move, do you think? Not me I’m, afraid…” And with that, she bid the group a good night.

Afterwards the lawyer and the advertising executive were wondering who the mysterious fourth person had been. “A therapist of some kind, I imagine,” said one. “A nurse, a social worker maybe?” The other one laughed: “I was thinking of a gardener. Or a comedian,” he said, with a wry smile.

You and I know who she was, though, don’t we? She was a refugee. Of course she was. She has that refugee wisdom which knows the truth about human life. About what really makes a difference, what can bring salvation to our broken humanity.

In Advent and at Christmas we celebrate refugee wisdom because the God of Jesus Christ is the God of refugee wisdom. A God who waits patiently for centuries, for billions of years, in fact, for the right moment to send His Son. A God who doesn’t issue instructions from on high but comes down to us, into the complexity and the grime of the human world where there is pain and despair. A God who does not hesitate to reveal Himself as a tiny little baby, defenceless and dependent, “mewling and puking in the nurse’s arms”.

And with that thought in mind, I commend to all of you involved in the mission of JRS this season of preparation for the coming of our God. And then with hearts set on Him and the peace He offers, may you welcome the God of refugee wisdom into your home this Christmas, may you sense His presence anew, inviting you into saving companionship, and may you open up every last dark recess of your heart to the true Saviour of the World.