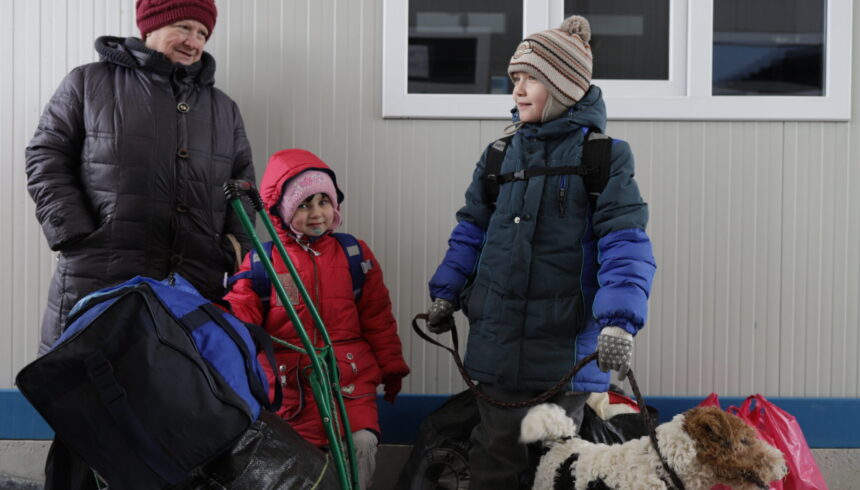 Forced migration from the Ukraine and the UK’s response

The public response to Ukrainian refugees has revealed and awakened public sympathy. 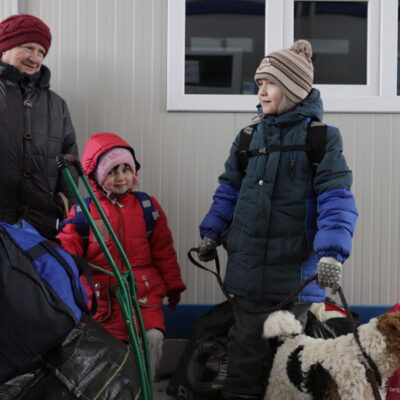 The people of Ukraine are living through catastrophe. Their lives in immediate danger, their homes destroyed or no longer safe, thousands upon thousands flee, and beg for sanctuary elsewhere. Their plight has seen an outpouring of public sympathy across Europe, including in the UK. People want to help. But the situation has revealed just how atrocious our provision for refugees is, and how much worse it is about to become. Here, we have an opportunity and a duty to build a refugee and asylum politics that is truly hospitable and recover a sense of common humanity that transcends borders.

So far, the UK government’s response has been woefully inadequate to address the urgency or lived reality of the situation. It is also contorted between the government’s own, fiercely anti-refugee policies, and a sense, driven by public pressure, that it ought to offer something better to these refugees.

The UK Government response ignores the reality of forced migration. Very belatedly, it announced a community sponsorship scheme for Ukrainian refugees. The willingness to offer hospitality to Ukrainians is welcome, though the lack of committed government support, and indeed lack of a detailed plan, are cause for concern.

More troublingly still, the government persists in wilfully ignoring the realities of forced migration, by insisting that Ukrainian refugees coming to the UK must first obtain a visa. This has resulted in people, those who are entitled to a visa, being held in limbo, trying to get to processing centres, and waiting for their visa to be processed. The problem they are facing is one that the 1951 Refugee Convention sought to solve. The Convention is very clear that refugees can travel without documents, and must not be penalised for not having them, in order to avoid situations where refugees would be prevented from finding safety because they couldn’t get prior authorisation to travel. EU countries have, accordingly, waived visa requirements for Ukrainians, thus allowing them to cross borders as they reach them.

Nationality and Borders Bill, rejection of the Refugee Convention, and a hostile asylum system

This represents from the government a blinkered determination to hold fast to the centrepiece, and cruellest absurdity, of its Nationality and Borders Bill: to punish refugees for travelling irregularly. This provision has been widely judged to contravene the Refugee Convention. Indeed, any Ukrainian refugees who can’t get visas, but who still try to find safe haven in the UK, are likely to face penalties once the Bill becomes law. They may also be housed in Napier barracks, detained, disbelieved, rendered destitute and forced to live in limbo for years. At JRS UK, we work daily with people who have fled for their lives and come here in hope of safety, only to be re-traumatised by a hostile asylum system.

As we stand in solidarity with Ukrainians, we must stand in solidarity with all refugees. The UK government’s warm rhetoric towards Ukrainians, and belated, public shows of hospitality towards them stand in sharp contrast to its plans to employ dangerous and illegal pushback tactics against refugees attempting to cross the Channel. There is clear racism here, and indeed in the response of EU countries, in this greater hospitality towards white, European refugees. The EU is right to have waived visa requirements for Ukrainians. It is the bare minimum that any humane society could do. Again, it contrasts with refugee pushbacks at many of Europe’s external borders. If only fortress Europe similarly flung wide its gates for Eritreans, fleeing one of the most brutal regimes in the world. We ought to reel in horror at the thought of Ukrainian refugees being placed in Napier barracks, brutal, military, and prison-like. This is an atrocious thing to do to people who have lost everything and sought out sanctuary among us. And indeed, we should reel in horror that Napier is, or ever has been, used to accommodate people seeking asylum.

The visas offered to Ukrainians who can access them, actually takes them out of the asylum system altogether. On the one hand this allows them to avoid the brutality of the UK asylum process and recognises that access to public funds and work is a far more effective way of allowing refugees to support themselves. On the other it is a step away from the stated international commitment of the Refugee Convention that has been a last line of protection for so many vulnerable people fleeing other conflicts.

In the UK as in many other countries, the public response to Ukrainian refugees has revealed and awakened public sympathy. In some ways, this echoes public sympathy in response to the fall of Afghanistan to the Taliban or, earlier, the war in Syria. As the public becomes aware of human suffering, they want to help, and this may result in increased awareness of the difficulties faced by refugees seeking sanctuary here.

Some of the present sympathy is, at least initially, specific to Ukraine; people are disproportionately aware of Ukrainian refugees, because of an inevitable media focus on Russia’s invasion of Ukraine. Perhaps it is also because these are people geographically close to us, empathy is easier. This is seen as a crisis for people like us, a crisis that we could envisage befalling us. This could turn to exclusivity and racism in which Ukrainians are regarded as exceptional, or fade away altogether, replaced by a renewed, racialised ‘othering’ of Ukrainians as the eastern edge of Europe is considered, after all, not proximate enough. But it could also renew a sense of kinship across borders. It is important to be clear that this is not less particular for being global. I am reminded of myriad human connections I have participated in and witnessed at JRS, where a culture of encounter and reciprocal hospitality is fostered. These are not vague or less relevant for being between people born a great distance apart. They are concrete instances in which people recognise that what hurts you matters to me. In governments’ unusual hospitality to Ukrainian refugees, they reveal something about whose humanity is seen and valued. As we strive to ensure that Ukrainian’s humanity is fully seen and valued, we must strive to ensure that the same is true of all refugees.

The government’s new scheme Homes for Ukraine is a positive step in encouraging hospitality towards refugees, but it does leave many unanswered questions, with details not yet worked out. It is very concerning that the government continues to insist that Ukrainian refugees need to obtain visas prior to travel. The Refugee Convention is clear that refugees do not need prior authorisation to enter a country to seek sanctuary. And we can see how important this is, in the experience of Ukrainian stranded at processing centres, if they can get to them, struggling to navigate complex procedures, asked for documents they may not have.

A call to solidarity

We must not take the government’s first, tentative and extraordinarily haphazard steps towards helping Ukrainian refugees as enough. We must insist on a politics that consistently reflects their dignity and offers them justice and protection. And as we do this, the absence of justice and compassion in our broader response to refugees is powerfully brought home. In light of the crisis in Ukraine, the cruelty and impracticality of the Nationality and Borders Bill is searing. The Bill is about to return to the House of Commons for its final consideration. There is still the opportunity to reject it, as there is the opportunity to build a just and humane asylum system.

As Sarah Teather, director of JRS UK, has said: “The horrifying situation for people forced to flee Ukraine requires an urgent response. But people are being held in limbo, forced to navigate complicated visa processes and await their outcomes, just to find safe haven in the UK. This shows the cruelty and impracticality of requiring paperwork from people fleeing for their lives. And at the same time as it claims to help Ukrainian refugees, the government champions the Nationality and Borders Bill, which would punish them, and so many other refugees, if they arrived here without documents. It is time to take a new approach that truly makes it easy for those in need to travel, and to abandon the Nationality and Borders Bill.”