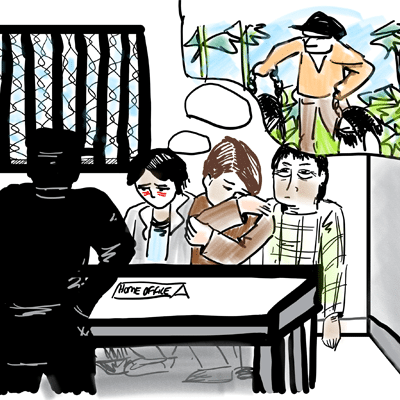 Hidden in plain sight: Working with trafficked people in detention

As part of #Unlocked18, Beatrice reflects on accompanying survivors of trafficking in detention

Sitting in the bustling Welfare Office in Harmondsworth as one of our regular outreach drop-ins is about to start, I find myself looking at the faces of those waiting. Some are there to see us, the Jesuit Refugee Service (JRS), where they already know they can come to for a listening ear and a friendly face; others are waiting to see a solicitor or the Home Office. Some look defiant, ready to fight their case and make their voices heard; others already look defeated, depleted of all energy. All of them hold on to the hope that when they leave the office they will be slightly better off than when they entered. In a system built on uncertainty, their greatest achievement would be to receive some answers: “What will happen to me?”, “When will I be allowed to leave this place?”, “Why am I here?”. The same questions are repeated over and over again, in the hopes that one time, this time, they will finally have an answer.

And that’s when I notice them, sitting together in a corner, talking quietly amongst themselves. They look young, though their faces betray a difficult past, lost childhoods and immeasurable suffering showing clearly without the need for words. One breaks off from the group, tentatively making his way to our table, encouraged by his friends and our smiles, a rare sight in that place. The volunteer who accompanies me is a Vietnamese religious sister, and it is to her that the initial conversation is directed, as he apologises profusely for not being able to speak any English. In a place that generates isolation by its very nature, cutting people off from wider society, some people end up being trapped in their own language too.

Once the young man (whom we’ll call Xuan) starts talking, it becomes very quickly apparent that he has a lot to say. And soon, comforted by the reassuring presence of my companion on the day, he starts sharing a truly harrowing account of exploitation and abuse, starting from a childhood on the streets of Vietnam and culminating in being trafficked to the UK as a minor, forced to work in a cannabis farm and ultimately made to pay by being disbelieved and imprisoned. One by one, the rest of the group all make their way to us. The details of their stories vary, but the broad elements are very similar: most of them were forced to work in cannabis farms in the UK and brutally tortured if they tried to refuse or to escape; they were arrested during police raids, convicted and subsequently transferred to detention on completion of their prison sentence.

Over the last year and a half, we have worked with 13 Vietnamese men who, like Xuan, displayed clear indicators of trafficking and were being held in Harmondsworth and Colnbrook. They came to us looking for comfort, someone to acknowledge their experiences and, in some ways, their very existence in a system where they go largely unseen, trapped in a web woven by their abusers. Fear, shame, threats to family are ever-present shadows hanging over them, making it almost impossible to know who to trust. Dealing with an immigration system that routinely challenges disclosures and tends to not believe individuals is also taxing: one man told us he had never believed his traffickers when they told him that he should not approach authorities because they would only deport him, but he now thought they had been right all along.

Read our briefing on Survivors of Trafficking in Immigration Detention

The negative impact that continued detention has on these men can hardly be underestimated. All of them tell us that detention reminds them of their previous captivity at the hands of their traffickers, and that this leads them to having flashbacks, nightmares and re-experiencing the abuse. Most of them carry physical marks of the torture, scars as visible reminders of what has happened to them, and other health problems resulting from a long history of abuse. And yet, they are often not officially recognised as victims, and even when their accounts are accepted, they are kept in detention because of their “unacceptable behaviour” or the “danger to the public” because of their convictions, a direct result of their exploitation. Despite showing clear indicators of abuse and vulnerability, they remain hidden in plain sight of those authorities who should protect them.

After 7 long months in detention, Xuan was finally released with appropriate care thanks to the support and involvement of many different individuals. Many others were, sadly, not so lucky and disappeared soon after being released without adequate support arrangements in place. Others yet are still fighting to make their voices heard, knowing that we at JRS and many others will be standing beside them, giving a voice to the voiceless and restoring hope to those who have lost it, and ensuring that what was hidden is brought to light.