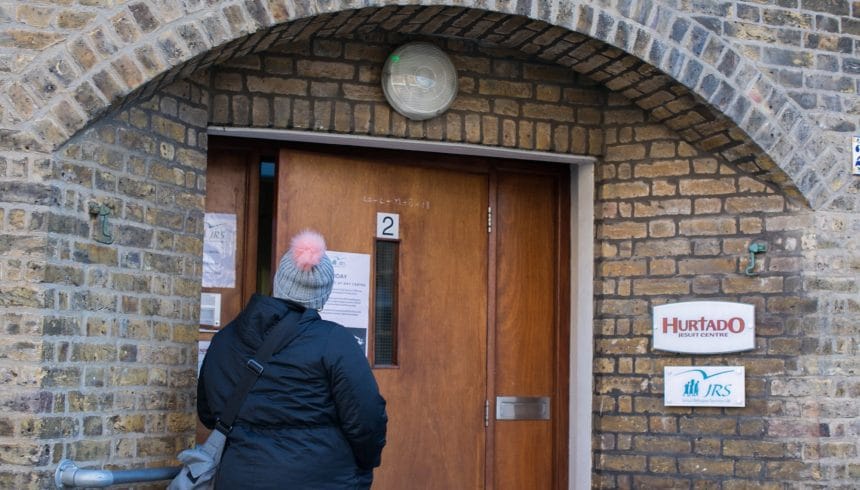 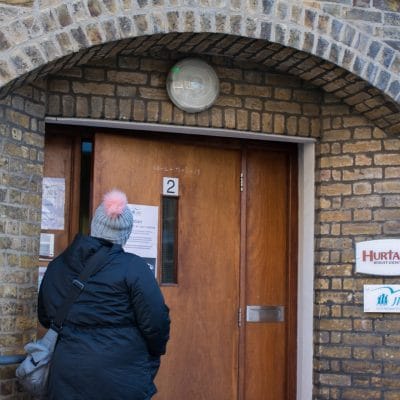 I first noticed Sister Margaret Hill FCJ when exiting Wapping Station en route to the JRS Day Centre and recall thinking ‘I bet she is heading towards the drop in’. Her intense preoccupation with her mobile phone almost resulting in her having to take avoiding action crossing the road. I beckoned towards her, with an indicative wave and I sensed that she was sufficiently confident with my manner to join up with me at the green space close to the centre. ‘I assume that you have been called to serve’. An unnerving silence ensued as she pored over my presence. ‘I imagine I have’ was her prickly reply!

Brief personal introductions followed as we entered the Day Centre, ‘

Like many penitents I now find myself offering to serve others’ I mused , uncertain as to whether I had made quite the impression I had intended. At the weekly briefing, Sister Margaret introduced herself,

‘Can you keep me away from that man’! She quipped, with more than a hint of dry humour, bemused stares flitting across the room.

‘So you know one another?’ a colleague queried.

‘Oh yes, our acquaintance stretches back at least an hour!’

Sister Margaret was tasked with joining me on the welcome desk, and after the briefest of inductions, I started to introduce her to the refugee friends who had restlessly assembled, with knowing smiles and companionable warmth radiating in all directions, as the centre went into action.

After the flurry of animated voices had subsided and the bustle of the morning abated. I began to pick up a trace of an accent,

‘So are you a Red or a Blue?’ (Sister Margaret trademark livery was her light blue jumper)

‘There is only one team for me.. Liverpool!’ She thumpingly asserted.

‘What about you? I bet you follow Oldham Athletic’

(when I shared my town of origin) ‘Manchester United.’

‘What! I cannot see how we can possibly work together!’

So thereafter this soccer banter aided with a tincture of acidulous wit, was eagerly taken up when refugee friends, proffered their team affiliations.

But Sister Margaret would, to my obvious chagrin, garner moral support when she expressed a ‘strategic’ fondness for Arsenal FC, a team with arguably the biggest following amongst our refugee friends. Indeed a delightful moment, that greeted us on one particular morning was when a refugee friend shared his joyful news that he had been ‘ recruited’ by Arsenal as a volunteer medic (he was a qualified doctor) and explained that his interest in football had been in part piqued by hearing us incessantly’ chatter on whose team had triumphed at the weekend.

Imagine I noted after he had left the centre and Sister Margaret had put her smart phone away ( of which she was inordinately attached! ) if our Refugee friend had missed hearing the ‘ Saint and Greavsie’ ( TV soccer pundits) stand ins!  We joshed away on many a Thursday, at times with irreverent glee (He was supposed to arrange for some of our soccer mad refugee friends to visit a football ground) at a visiting volunteer Belgian Jesuit, whose brio and continental jocularity was overtaken by a creeping health immobility, which meant that we had to imagine other possibilities for our friends to advance their keen desire to attend a premier league fixture.

Shortly thereafter, Sister Margaret’s own health declined and she withdrew from the JRS to recuperate in what she wryly described as the ‘ reserve team’ venue in Isleworth, West London. It was with considerable sadness that I sometime later heard the news of her untimely death. I met up with Sister Angela for her requiem mass which was held at a catholic church in nearby Poplar. The funeral eulogy was movingly delivered by Father Damian Howard SJ and as part of the celebration of her life, her fellow nuns placed a football scarf and bobble hat on her coffin. ‘But whose team’s scarf was this?’ I pondered, holding back a tear or two. Sister Margaret was a devoted fan of the Rovers, Tranmere Rovers (Merseyside’s third team) .

As I left the church with Sister Angela, I recall saying

‘I never imagined that ‘our’ Margaret was ‘ a ‘closet’ fan of Tranmere Rovers!’

I later wrote to the secretary of the Tranmere Rovers FC supporters club (address: Prenton Park, Birkenhead) informing her of Sister Margaret’s undimmed (if hidden!) passion for the club; and of her death, which information was then featured in their on -line fanzine edition.

Since her passing, oftentimes at Wapping Station en route to the day centre I have looked around, with a misty eyed reverie, calling to mind Sister Margaret striding purposefully, phone in hand, always a minute or so ahead of me.

Remembering not only how she shared her knowledgeable passion for football with our refugee friends, but also how she would at times remind me that some of the most joyful and unsurpassable moments, ( for the fellowship of soccer fans !) are those in which our shared humanity finds some of its finest expression in the beautiful game. In one of her well seasoned conversational openers proffered with barely disguised annoyance and faux surprise, she would say in a stage whisper, standing imperiously at the welcome desk,

‘I notice your team were on Match of the Day again!’

To which she was wont to add,

‘I imagine I am not the only one who’s not surprised!’

Mike has been a volunteer with the Jesuit Refugee Service for many years, as a welcome volunteer at our weekly drop-in day centre.

This written piece is part of the ‘JRS Imagines’ anthology, for Refugee Week. You can read more from the collection here.