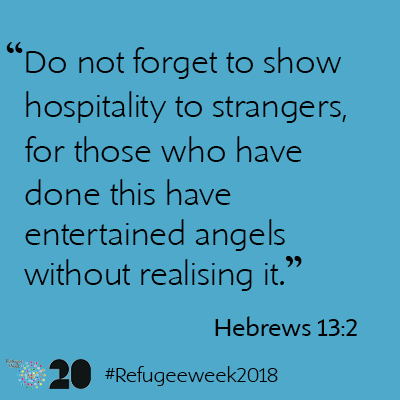 In welcoming the stranger we encounter angels

In the lead up to Refugee Week, Fr. Mike Smith SJ reflects on 20 words of Scripture

“Do not forget to show hospitality to strangers, for those who have done this have entertained angels without realising it.“

The writer of this passage from the Letter to the Hebrews is probably thinking of Abraham, who one day saw three men walking past.  He invited them to stay for a meal.  After they had eaten they asked after his wife, Sarah, who was getting rather elderly.  They promised to return in a year, by which time, they said, Sarah would have a child.  She rather let the side down by laughing out loud, but sure enough, a year later, Sarah was nursing her baby son, Isaac.

The three men in this story were obviously rather special, and are usually described as angels.  And the new baby was rather special too.  In the Gospels, though, it all seems to be more ordinary.  So ordinary in fact, that every time we meet and care for anyone at all, we are not just doing so because Jesus Christ asked us to, but we are doing it to Jesus Christ himself.  ‘As long as you did it to the least of my little ones’, says Jesus in Saint Matthew’s Gospel, ‘you did it to me’.

So when we offer hospitality to refugees who have had to flee their homelands for fear of persecution or racist ill-treatment, we are welcoming angels, welcoming Jesus Christ himself.  They certainly don’t look like the conventional idea of angels, nor do they look like how I imagine Jesus Christ would look – which is probably why the writer of the Letter to the Hebrews reminds us that we are entertaining angels without knowing it.

Jesuit Refugee Service in the UK recently published a report called ‘Out in the Cold’, which describes the plight of refugees who have fled to this county from violence and persecution in their own homeland.  Many spend time sleeping rough, often have to beg for food; all live in constant fear of being unjustly treated and detained or sent back.  It makes painful reading, but  it does point out some strangers who are surely angels in disguise.

In my work with Jesuit Refugee Service it’s a joy and a privilege for me to welcome refugees, to help with providing food and clothing, and to be part of the hospitality service that provides accommodation for some of them.  Not quite what the writer of The Letter to the Hebrews had in mind – because I do know I’m entertaining angels.

Keep up to date with all of JRS events this Refugee Week by following us on social media, including our upcoming conference ‘Refugee Stories: Changing the Narative’