It is wonderful to speak out 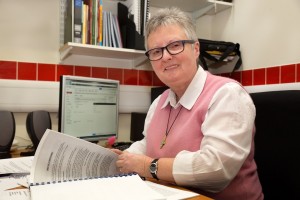 What can we do together to improve the lives of asylum seekers here in the UK? JRS UK staff and advocacy volunteers share what advocacy means to them.

Sr Margaret Baxter SSMN, Detention Outreach Co-ordinator, helped two detainees give evidence to the UK parliamentary inquiry on detention via a video link, co-wrote JRS UK’s submission to the inquiry and herself also spoke at the launch of the report.

“For me, being involved with advocacy means to create an opportunity for the detainees I work with to self-advocate, then to help them prepare. For example, for the detention inquiry, we all wanted to be clear on what we wanted to say, so that it was a balance of their experience. On the moment of the hearing, I sat with them and then took each one into the room and then left, to allow them to speak for themselves. When they came out of the interview, I saw a liberated delight in these young men who had been empowered and now able to speak for themselves. That their stories were taken with credibility was in contrast to their experience of coming into country and making their asylum application against disbelief. There is nothing like the sincerity of the person themselves advocating on their own behalf. And with the detainees, there is a sense of solidarity with one another, even in the midst of their vulnerability.”

Souleyman Sow, refugee poet and anti-detention campaigner, used to attend JRS UK’s Day Centre and now often speaks at events to explain the negative impacts of detention on the lives of vulnerable detainees, most recently at a school sixth-form education day.

“To be honest, before getting involved in campaigning, I did not know where I was, I had nowhere to start. It lifts me up and puts me on my feet and without it I would be somebody else. My main message is detention. It has an impact, it keep people in limbo. So to decision makers, I say that we have to put detention on trail, it is a waste of tax payers’ money. And let’s have a time limit on detention and we will see some of the problems for detainees ended. It is wonderful to speak out, I have been a tour guide, I have spoken at the parliamentary inquiry. Advocacy is not about money, it is not about food – you have to get involved in the community, after your release what have you contributed to the community? When I see my colleagues, I tell them come and get involved. So just involve yourself!”