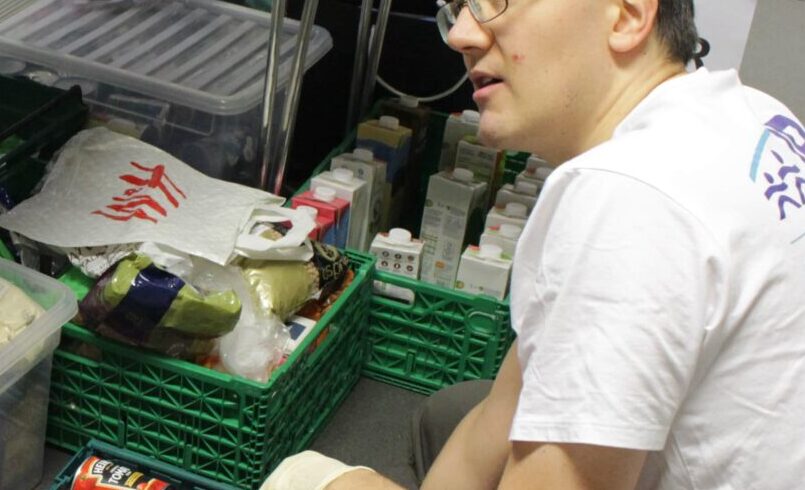 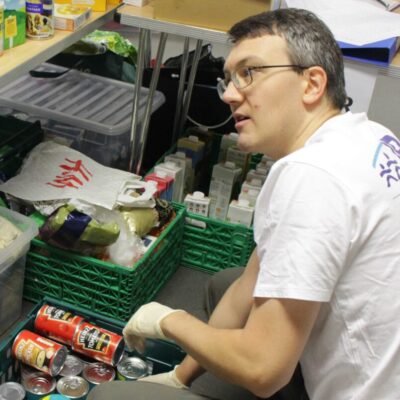 If you had told me in late 2018, which was when the Provincial started conversations about where I might go for regency*, that my regency would include helping in a pop-up vaccination clinic with JRS, my first thought would not have been a placement in the east-end of London. That is just one of the ways that the pandemic has defined the shape and nature of my regency.

Things had already changed since my first encounter with JRS in Wapping, a six-week placement as a novice in 2016, when JRS was a lot smaller. Coming back three years later for regency, I noticed the considerable growth, not simply measured in staff numbers, but also in the expansion of things like the hosting scheme and refugee activities, and the setting up of the legal project.

Regency has meant prolonged experience of full-time apostolic work and a new experience of Jesuit life, not living in a formation community as I did in novitiate and when studying after first vows, but now living as the only scholastic in community of formed Jesuits. JRS also represented a different working environment as, although I was part of a Jesuit work, I wasn’t always surrounded by other Jesuits or other religious.

The rupture of the pandemic is associated in my memory with a particular moment on the first Thursday after we closed the centre in March 2020. I walked into the main hall and noticed the silence and absence of people. Just then, the local church bell struck 10 o’clock and I thought how, normally, this was when the centre would be at its busiest. However, at that moment, away from the centre, JRS staff and volunteers were moving very quickly to provide remote support to refugee friends: through online activities, deliveries of food and phone support. We’ve also managed to respond to a constantly changing environment during that time – not just changes brought about by the pandemic which has taken us from food and toiletries deliveries to being a pop-up vaccine clinic, but even in our work advocating around Channel crossings, and supporting people held at Napier barracks in Kent.

Positioning ourselves in a rapidly changing environment has required discernment combined with an ability to respond quickly, which is a difficult balance to strike. Ignatius cautioned against acting with “a zeal not according to knowledge”, where short-sighted intense activity got the better of pacing oneself to serve God and neighbour effectively over the course of time. The Latin word magis, literally meaning “more” or “to a greater degree”, is widely used in Ignatian spirituality but is a term that defies any single definition. On its own, the literal sense of “doing more” cannot do justice to the term because it suggests the kind of zeal Ignatius warned against. At the same time, Ignatius was not suggesting that Jesuits should either rest on their laurels or choose the easier option. To the magis, Ignatius asked Jesuits to bring magna anima (“greatness of spirit”). Again, the English word magnanimity doesn’t quite catch what Ignatius meant. At a practical level, it involves the readiness to embrace new challenging projects with a degree of humility and trust. When taking on that project there’s always a risk that it might not work and experiencing failure may dent my pride. But magnanimity is asking for the courage to take that risk and trust in God. The Chilean Jesuit St. Alberto Hurtado, after whom the JRS centre is named, understood this when he said:

“The greater the task, the smaller one feels; better to have the humility to begin great tasks with the danger of failing, than to reduce ones goal out of pride, in order to guarantee success”

When we adapted the JRS centre into a food distribution centre, I knew what Hurtado meant because I worried about failing, that there was great ambition but we were simply going to run out of food or not have the drivers. However, the generosity of volunteers and supporters, and the way other organisations reached out to collaborate with us was remarkable. When we needed pasta someone very generously and completely anonymously bought several hundred pounds worth, but there were also people living locally who turned up at the door and gave two cans of chopped tomatoes or a box of breakfast cereal because they heard we were running a food bank and wanted to donate. The level and difference of response has been wonderful, and we kept going.

One of the other really striking things for me, has been how central JRS is for many of our refugee friends lives. Whether it’s their social lives, the opportunities for volunteering and activities, the friendships they make through JRS with other refugees, volunteers and staff members; or the specialist support they receive from the JRS legal project, destitution team, or the work with post-detention support.  There’s an essential, holistic service that we’re providing to people who find themselves in a position where they can’t access anything else.

I have also witnessed how JRS provides a space where friends feel they can talk comfortably about their faith in a way that might, in other secular spaces, get shut down. This is something that friends appreciate about JRS because for many, faith is an essential part of their lives and identity. For our friends, their faith is a source of hope and we’re trying to nurture that hope. It’s a realistic hope. Going through the UK asylum system, a person’s hopes are frequently raised and then dashed over and over again. We’re very realistic about what we can do and offer, but we can still be a source of hope for people.  Ultimately, the things friends most want is to get on with their lives and not be living in a legal limbo.

I’ve noticed when somebody gets their status regularised, and they can finally work and study, the first thing they tell me is “I’m enrolling on a course” or “I’m now looking for a job” – they’re motivated. They want to participate, and they want to contribute to the society they’re in. That’s so different from the narrative you hear when people are talking about asylum.

The values of JRS, of accompaniment and service are also core Jesuit values. Even if you’re not a Jesuit working in JRS, they’re the values that permeate and are central to how you would express Jesuit identity. Being part of JRS for the last 2 years, it’s been an opportunity to root me more in the Society of Jesus, but at the same time, quite often my work hasn’t involved other Jesuits. Lay collaborators, volunteers and refugee friends have all taken a role my formation without even realising it, simply by rooting me in those values.

There is something transferrable about my experience at JRS, that I could take to being a Jesuit in another work. That work could be elsewhere in the social apostolate, but it could also be in education or chaplaincy. JRS is just one way we express these values and it helps to root your Jesuit identity, but it also allows you to see the connection; these values are alive and working somewhere else and they inform you.

Certainly, JRS will always have a special place for me. An elderly Jesuit once told me, that there are certain things that will be touchstone experiences in your formation as a Jesuit, and that you will always go back to – that will answer questions like ‘why am I motivated to do this’? My experience at JRS over the last 2 years has definitely got its own touchtone moments that will bring me back to why I’m a Jesuit, and why I feel called to this way of life.

* The regency is a period lasting two to three years during the training of a Jesuit. This follows his initial admission to the Society of Jesus, during the two years of ‘novitiate’ when they are known as a Jesuit novices.