Leave to Remain: “I didn’t know it was going to be this difficult” 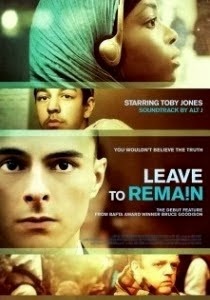 Kate shares her experience of attending a screening of Leave to Remain, a new film, shown as part of the 2013 BFI London Film Festival, about the experiences of teenage asylum seekers in Britain.

Leave to Remain tells the story of Omar, Abdul and Zizidi, all young people growing up in London, having applied for asylum in the UK. Each one has left their own country for security and finds themselves on a rollercoaster of new tribulations, dilemmas and emotions. Together with their teacher, Nigel, they try to navigate their way through the asylum system, negotiating with the authorities for their well-being and safe future. As Bruce Goodison says* “It is nothing short of miraculous when these children survive and remain sane. But far from being victims of an uncaring system, having battled to be here, they don’t give up and also feel compelled to support the country that becomes their home.”(* quoted in The Independent newspaper film review).

It made me smile when the audience laughed as one of the young asylum seekers pronounced Peckham (a neighbourhood in south-east London where I used to live), as more dangerous than the province in Afghanistan they had fled from. The young refugee’s choice of T-shirt “I © Kabul” showed the irony that he had not come here to London as a tourist. And I was moved as I reflected that the features of life in the capital in the film that I enjoy, like fireworks at Diwali or not being afraid of traffic wardens, take a long time getting used to if you are frightened of gunshots or people in uniform who might oppress you.

But the best part was a surprise! Just as I was packing my notebook and bag up the lights went on in the cinema and onto the stage strolled half of the cast, the Director and Producers. There was a full house, so all the spectators were treated to an interview with Bruce Goodison and insights from the three main actors who played Omar, Abdul and Zizidi. Masieh Zarrien, who played Abdul, had himself come to the UK from Afghanistan as a child. Masieh decribed the experience of acting for the first time on the film as an “amazing experience in general… being a professional environment taught me a lot” and shared his pride at seeing himself on the big screen.

Seeing the film and hearing Masieh speak was touching for me as one of my friends, herself a refugee originally from Afghanistan, now fosters young Afghani refugee boys in her home, helping them heal and adapt to their new circumstances. I now have a better insight into some of the challenges they face together, dealing with the difficulties of an uncertain future, and the importance of being part of a wider family here in the UK.

The film raises lots of interesting questions, some of which are addressed by the Refugee Council’s Q&A sheet specifically prepared for Leave to Remain: http://www.refugeecouncil.org.uk/policy_research/policy_work/briefings/leave_to_remain_q_a

You can also read a more in-depth film review on: Thinking Faith – the online journal of the Jesuits in Britain