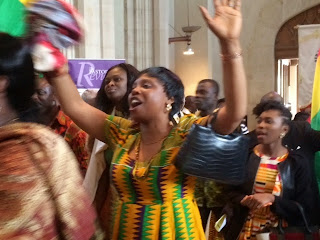 There was a sea of colourful banners, flags and parasols at St George’s Cathedral, Southwark on Monday as an international congregation of more than 1,500 people, many in their national dress, processed in for the annual Migrants Mass celebrating the Feast of St Joseph the Worker.

Organised by London’s three Catholic dioceses: Brentwood, Southwark and Westminster, with the ethnic chaplaincies and Justice and Peace Commission, and the Tablet, which celebrates its 175th anniversary this year, the chief celebrant was the Archbishop of Southwark, Most Revd Peter Smith. Cardinal Vincent Nichols, Archbishop of Westminster, Bishop Alan Williams of Brentwood and many priests concelebrated.

The Mass was attended by ambassadors from Libya, Ethiopia and Lithuania, Justice Minister, Lib Dem Simon Hughes, who has served as MP for Southwark and Bermondsey for many years, Lib Dem Sarah Teather who led a campaign to stop the detention of child refugees, borough mayors and councillors, from around the capital.

Music throughout the service, led by Francis Novillo, included hymns and songs from Cameroon, the USA, Australia, Slovakia, China and Uganda.

The Bidding Prayers were led by pupils from Notre Dame RC Girls’ School in seven languages, including Tamil, Tagalog and Yoruba.

Welcoming the congregation, Archbishop Peter Smith described the Mass as “a joint venture of prayerful support for migrants in our city.”

In his homily, Archbishop Peter reflected on the day’s Gospel in which Jesus is rejected by the people of his hometown of Nazareth. He described how the Holy Family were refugees – forced to flee Bethlehem when Herod began killing newborn baby boys: “We have few details but we assume they lived in peace until they returned to their homeland, settling, as St Matthew’s Gospel tells us, in a town called Nazareth. Jesus would have been very small when they left but I’m sure Mary and Joseph would have told him the story as he got older. The irony of his rejection by the people he lived with I’m sure would have been in his mind when he began his public ministry. Rejected by the people he lived with but in the years previous to that accepted in a foreign land.”

The Archbishop pointed out that Jesus’ public ministry it has its core focus compassion, loving kindness and mercy – care towards the oppressed, the exploited, the poor.

He said Pope Francis has repeatedly called for countries to adopt a more “generous openness” to migrants, saying: “I am a pastor of a Church with no borders.”

The Archbishop rebuked those with “blood on their hands” who tolerate, even passively, human trafficking. He had particular criticism of the UK’s detention centres for migrants, saying these were “stripping them of their human dignity” and he expressed alarm at the crisis of boat refugees in the Mediterranean.

Archbishop Peter went on to call for prayers for politicians. “We must pray for them” he said. “They have a very difficult job.”

Migrants bring new life and vibrancy to British society and our Church, the Archbishop said.

He concluded with an upbeat story of British Olympic runner Mo Farrah who came from Somalia as a refugee at the age of eight. Asked whether he would prefer to run for Somalia rather than Britain, Mo said: ” Look mate – this is my country. When I put on my GB vest I feel proud.”

After the Mass there was a large reception and spread of international food organised by the ethnic chaplaincies and the Tablet.

Antony, a student from Iraq, told ICN: “The Church in London has been a great comfort and support to me and my family. My parish makes us all feel welcome. I don’t know what our future holds but God willing we will go back to our country one day.”

A young nurse from Slovenia, Grazyna said: “My experience here has been good. My colleagues and neighbours seem very accepting and I’m happy to be here although I miss my family.”

The Feast of St Joseph the Worker was instituted by Pope Pius XII in 1955. The Mass for Migrants has been celebrated in London every May Bank Holiday since 2006 when it was introduced by the then Archbishop of Westminster, Cardinal Cormac Murphy O’Connor.