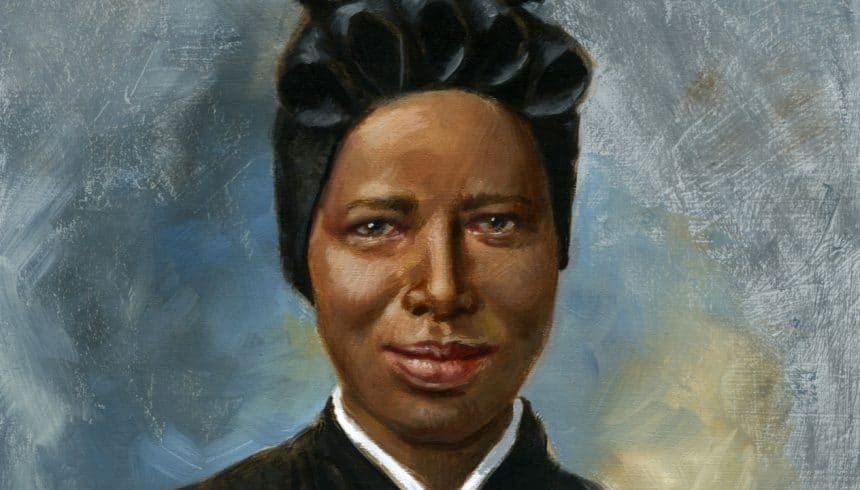 On the Feast Day of St Josephine Bakhita, Sr Rose Mary reflects on the victims of trafficking. 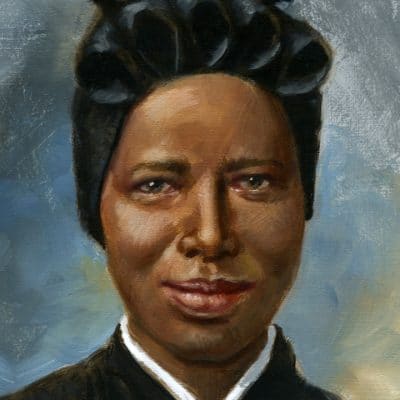 Human trafficking is an atrocious scourge and aberrant plague and an open wound on the body of contemporary society.

These heavily weighted words declared by Pope Francis in 2017*, were delivered at the annual Conference of the Organisation for Security and Co-Operation in Europe (OSCE) on trafficking of children. The conference opened up channels of discussion on how often victims are “markers” – a “diagnostic sign” – of the state of family life and society today. Survivors of such abhorrent treatment and human deprivation at the hands of abductors, traffickers and perpetrators of human slavery tell us much about our modern world.

The canonisation of Josephine Bakhita in 2000, aroused the consciousness of many in the Church and within society to explore her life and to recognise that the words of Isaiah 58, decrying slavery, oppression, and suffering still persists in the 21st Century.  Each year, as we celebrate the International Day of Prayer and awareness against Human Trafficking on her feast day, February 8th, what thoughts cloud our minds as we hear and pray:

“O God, when we hear of children and adults deceived and taken to unknown places for purposes of sexual exploitation, forced labour, and organ ”harvesting” our hearts are saddened and our spirits angry that their dignity and rights are ignored through threats, lies and force”  ?

Do we see this as an African or Asian problem, out of our experience and immediate responsibility?

Three years ago, we celebrated the anniversary of the birth of Frederick Douglass, as one of history’s great abolitionists – a man born into slavery in the USA but rose to prominence and influence. Yet today, 203 years on, we still hear annually the appeals of Pope Francis of the “transcendent dignity of the human being” – his call for cooperation from all governments to be a powerful resource in the battle to eliminate the new global form of slavery. (Address to Congress, 2015)

Recent data shows the UK government failed to recognise thousands of vulnerable survivors of trafficking and modern slavery who have been wrongfully detained since January 2019. “This incarceration brings back memories of abuse at the hands of traffickers.” – read more from our Director Sarah Teather, and other organisations who have condemned this practice.

Do we feel disgust when we read constantly in the news of the abduction in Nigeria and elsewhere of young girls and boys – some never to be seen or heard of again? This reality all seems so far away, out of our reach and our immediate concern. But just recently, Pope Francis urged Catholics in Britain to “open their eyes” and “hear the cries” of human trafficking; these are often people washing our cars, working on our building sites, in our nail bars, factories or in remote farms manufacturing cannabis – an estimated 13,000 people not so far away and within our reach!

Many victims arrive on our shores thinking that they are coming for freedom, a chance to work; but instead become victims of exploitation and, more often, are criminalised while their perpetrators remain hidden and go free!

One of the privileges of working with JRS is that we meet this head-on in our accompaniment of those who are detained – the victims of trafficking and slavery. Even those who are released, they too struggle like Bakhita throughout their lives, with the memories and psychological scarring of former beatings and dehumanising treatment. Often this is the first time that they find someone who “hears their cries” ; knowing that they can share their story and be listened to.

We find that even though released into society as refugees, many still hold the fear of threats and recrimination against their families back home – such is the “atrocious scourge” and “aberrant plague” and “open wound of slavery” – it never goes away!  Our compassion and perseverance with their situation and struggle is paramount for them to regain some dignity and trust.

When we pray and reflect this February 8th for the protection of all those victims of modern day slavery and trafficking, let us remember that this has to do with our duty to recognise and defend the “inviolable dignity of those who flee real dangers in search of asylum and security.” As we approach Lent, is this not the fast worth choosing:

Let us pray that we can “open our eyes” (and hearts) and “hear the cries” of our brothers and sisters who are closer to us than we think. Pope Francis says: God will liberate all those who have been threatened, injured or mistreated by trade and trafficking in human beings and may bring comfort to those who have survived such inhumanity.”

But it is us who will make this happen!

Sr Rose Mary is a volunteer with the detention outreach team, and regularly accompanies those held at Heathrow Immigration Removal Centres, Harmondsworth and Colnbrook.

Each month you are invited into a space of prayer and reflection by a different JRS team member in our monthly ‘Praying with Detainees’ email.