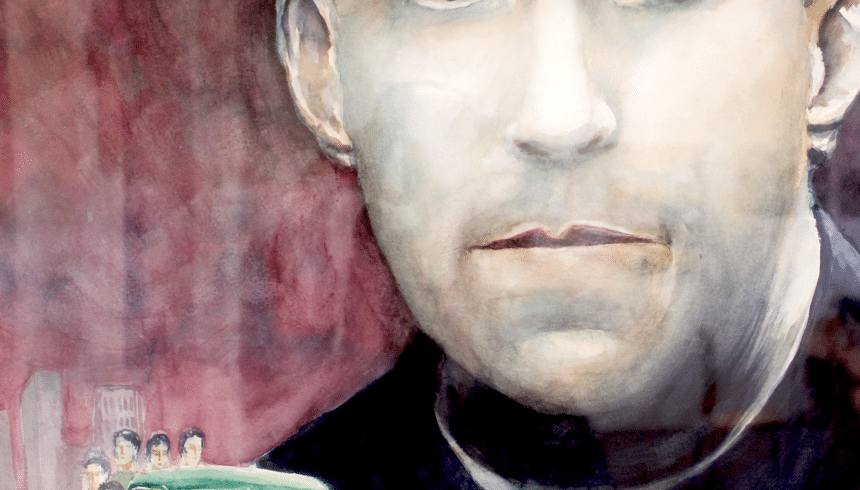 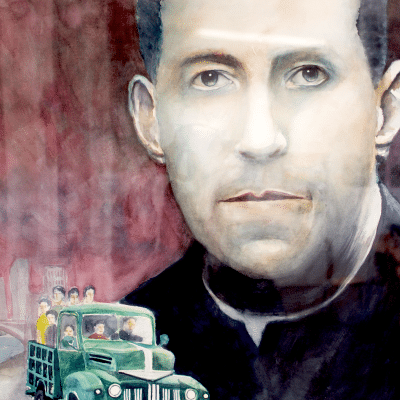 At JRS UK’s centre in Wapping, this large beautiful painting of Saint Alberto Hurtado hangs in the dining area. It is there because the centre is named after him. It is located on the wall, just to the left of the serving hatch, where the refugee friends come for a hot lunch every Thursday.

When I queue for my lunch with the refugee friends, I look at this painting and I think how the children in Santiago must have longed to hear that green pick-up truck coming to collect them for a meal and a night’s peace and rest.  It must have been a powerful symbol of hope and love.  I think of the joy they must have felt when they heard it and realised it was coming their way.

I love that our JRS centre is a giver of joy and hope like that for the refugee friends who come.  But, we have no green truck – they have to come by bus or walk. Over a hundred refugee friends come each week to have lunch, chat to others, meet with advisers, and look through donated items for what they need.

Alberto Hurtado was born in 1901, and grew up in poverty. Helped by scholarships, he took a law degree in labour law in 1923. Together with other law students, he set up a legal bureau to provide support and advice to labourers in difficulty – in some ways similar to the new legal team at JRS UK.  He then became a Jesuit, and was ordained a priest in 1933.  He completed his doctorate in 1936 and became a professor in the University of Santiago.  He became aware of the difficulties facing the church in Chile, and it was at this time that he founded the Hogar de Cristo (Home of Christ), which housed children in need of food and shelter. Hogar de Cristo still flourishes today – currently serving over 25,000 people in need.

In the context of a hostile immigration policy, many seeking asylum in the UK find themselves and their families at risk of detention or destitution. Those who work with refugees often understand their role as, at core, one of accompaniment: being with and for the other.

Our up-coming conference ‘Walking with Refugees’, seeks to reflect on this practice of accompaniment, examining not only what it can contribute to the lives of refugees, but also how it can be transformative.

Find out more and book your tickets