The Hurtado Jesuit Centre, but who was Alberto Hurtado SJ?

Jesuit Refugee Service UK is based at the Hurtado Centre in London. Why is the Centre named for him and what relevance does this Jesuit have for JRS-UK’s work? 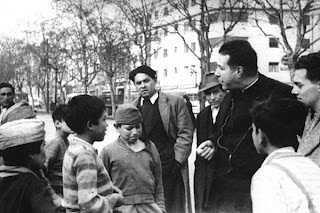 “I hold that every poor man, every vagrant, every beggar is Christ carrying his cross.  And as Christ, we must love and help him.  We must treat him as a brother, a human being like ourselves.  If we were to start a campaign of love for the poor and homeless, we would, in a short time, do away with depressing scenes of begging, children sleeping in doorways and women with babies in their arms fainting in our streets.” St Alberto Hurtado SJ
Canonized in October 2005 by Pope Benedict XVI, Alberto Hurtado Cruchaga was born on 22nd, January 1901 in Chile.  The death of his father when he was four years old meant that the family – his brother and his mother – knew great hardship with Alberto and his brother moving from relative to relative.
This experience caused his heart to want to tackle social issues.  He studies labour law but rather than pursue a career in law, he enters the Jesuit novitiate in 1925.  This leads to further studies: humanities, philosophy, theology.  He obtains a doctorate in pedagogy and psychology in 1935, two years after his ordination as a priest.
His heart’s desire to tackle social inequality not far from his mind, he sets up the first Hogar de Cristo (Home of Christ) shelter to take in children in need of food and shelter.  More shelters are opened around the country and it is estimated that between 1945 and 1951, more than 850,000 children were helped by them.
Hurtado dies in Santiago of pancreatic cancer in 1952, a much loved man.  Still popular in Chile, his desire to treat every human being as “a human being like ourselves” underpins the ethos of every organisation bearing his name.
Here in Wapping, JRS at the Hurtado Centre seeks to just do that: be a refuge for our fellow human-beings fed up with the bureaucracy of the asylum-seeking process or fed up with surviving instead of living and fulfilling their ambitions and plans.
Every Thursday, we get together, talk, have coffee and just be.  Why don’t you join us one Thursday morning and help keep the legacy of Alberto Hurtado alive?
The feast day of St Alberto Hurtado SJ is 18thAugust. To find out  more about the Hurtado Jesuit Centre: www.hurtadocentre.org.uk