The needs of urban refugees 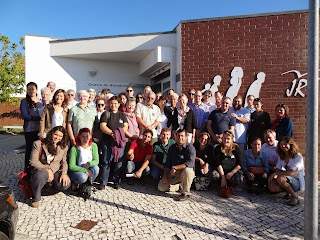 Sister Bernadette has been working 4 years with JRS. Before that, she spent 10 years with Asylum Welcome in Oxford, co-ordinating English classes and the advice team. She shares her reflections on the different contexts for urban refugees here in the UK and in Portugal.

The purpose of the meeting this year’s JRS Europe meeting was the theme “The Refugee in the Urban Context”. We looked at how JRS can respond to the needs of urban refugees. The meeting offered a comparative approach on how different countries deal with the same issues, all with the ultimate same aim.

In contrast with JRS UK, JRS Portugal works mainly with migrants and just 5% of refugees, plus they run a night shelter for 17 people. Also, in Portugal, migrants are supported by governance subsidies and they are allowed to work. Migrants there normally do an apprenticeship during which they are not paid, but if they do well they can get a paid job in future. For example, we had the chance to meet a young man, who in his own country had been a professional footballer and now taught skills to children. We also went to visit an elderly people’s centre where some migrants were working as well. These examples show that the context in Portugal is different to here in the UK.

Generally speaking, it was very interesting meeting people from different European countries like Albania, Romania, Macedonia or Ukraine. I found the wide representation of JRS across Europe very helpful. Some of the participants were from the main office; some were volunteers and some members of staff. There were a lot of young people, especially volunteers. I found it surprising to be invited as a volunteer as I thought the meeting would be just for staff! This meeting gave me a wider view of what JRS is and how it works in Europe. To me it was like looking at the wider church family which I found it quite inspiring.