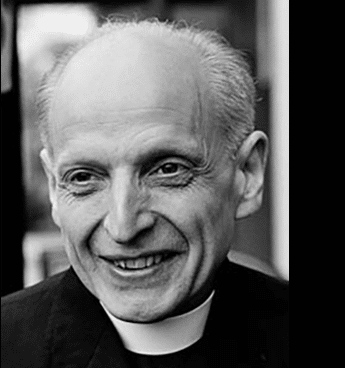 The Rich Tapestry of Pedro Arrupe

On its 38th anniversary, Jim Conway reflects on the growing tapestry of JRS and its founder

Fr. Pedro Arrupe founded the Jesuit Refugee Service on his 73rd birthday, the 14th of November 1980. Its birth was in response to a need that has not diminished: the suffering of refugees and other migrants forced to leave their homeland. On the 38th anniversary of JRS, Fr Jim Conway, a member of JRS UK’s management committee, traces the contours of Arrupe’s life.

I entered the Jesuits when I was 31 years old and so brought with me a fair amount of experience. Life had been woven together with the usual mixture of ingredients and with its fair share of ups and downs.

When it came to meeting the vocations director to talk about a growing sense of Jesuit vocation, I wondered whether my past experience would count for anything. Would it have to be left at the door of the novitiate when I joined? Would the beginning of my ‘religious life’ necessarily imply that my ‘previous life’ had been of less value? Was it almost a kind of trial run for the real thing? Not at all, he assured me, everything that had brought me to this point in my life, the threshold of entering Jesuit life, would be welcomed and greatly valued, and indeed woven into the fabric of whatever unfolded afterwards.

The weaving of Fr. Pedro Arrupe’s life is a fine example of this.

Before entering the Society of Jesus in 1927, Arrupe devoted himself to medical school, winning prizes for his abilities. He entered the Society before completing his studies but didn’t forget about them, or indeed leave them at the door of the novitiate. Almost two decades after joining, Arrupe found himself in Japan overseeing the novices in the city of Hiroshima. On the 6th of August 1945, an atomic bomb was dropped on the city. He described the event as ‘a permanent experience outside of history, engraved on my memory.’ Using his medical skills, Arrupe helped those who were wounded or dying. The Jesuit novitiate was converted into a field hospital where around two hundred people were nursed. Pedro recalled, ‘The chapel, half destroyed, was overflowing with the wounded, who were lying on the floor very near to one another, suffering terribly, twisted with pain.’ The etching of this on his memory would sensitise him to suffering in the years to come, deeply shaping his thinking.

Learn more about the life of Pedro Arrupe

Arrupe was elected Superior General of the Jesuits in 1965, soon after the Catholic Church concluded its Second Vatican Council. The Council transformed the Church’s understanding of itself and religious orders were encouraged to rediscover and renew themselves in light of it. For the Society, it brought the 32nd Jesuit General Congregation (GC32) which, in reading the ‘signs of the times,’ declared the Jesuit mission as ‘…the service of faith, of which the promotion of justice is an absolute requirement.’ ‘A faith that does justice’ was, from then on, written into the soul of the Society of Jesus, leading to a pivotal change in how priorities were discerned and works chosen.

It was towards the end of his life that Pedro Arrupe began to weave the tapestry of the Jesuit Refugee Service (JRS). In seeing women, men and children flee from conflict and repression in Vietnam, crowded into small boats seeking safety and refuge, Arrupe appealed to Jesuit provincials worldwide for practical assistance. The generous response he received led to him thinking more systematically about how Jesuits and their co-workers could respond to forcibly displaced persons. With the help of British Jesuit, Michael Campbell Johnson, he discerned JRS’s three-pronged approach to accompany, serve and advocate for the rights of refugees and forced migrants. JRS’s mission was launched.

“God is calling us through these helpless people. We should consider the chance of being able to assist them a privilege that will, in turn, bring great blessings to ourselves and our Society.”

Today JRS is present in over fifty countries, working in a variety of situations and with a multitude of programmes, responding to the context and need of those accessing its service in a particular place. Wherever it is to be found, its distinctiveness lies in its particular ‘way of proceeding,’ which, according to Arrupe  ‘consists essentially in a ministry of presence and sharing, of “being with” rather than “doing for”’. A visit to the JRS day centre in Wapping, East London is overwhelmingly an experience of this. Around 100 destitute refugee friends attend the Day Centre on any given Thursday, but there is still the sense of personal accompaniment – ‘being with’ rather than ‘doing for’ – permeating through the space. Accompaniment of this sort nurtures service which in turn generates advocacy rooted in the needs and experience of refugee friends.

Thirty-eight years on, the weaving continues and the tapestry of JRS grows. Threads of refugee stories – testimonies reflecting the pain and suffering but also the enormous hope and endurance of those forced to leave their homeland – knit together a rich and detailed fabric. Its texture is the experience and sharing of so many gifts and talents, skills and knowledge, by refugees and staff alike who together build a place of welcome and hospitality.

As JRS celebrates its 38th birthday, we lift a glass to its founder, Fr. Pedro Arrupe. His inspiration lives on in the rich tapestry called the Jesuit Refugee Service. May many hands continue its weaving.

Read more on the legacy of Fr. Arrupe