The story of a refugee is a story of great courage 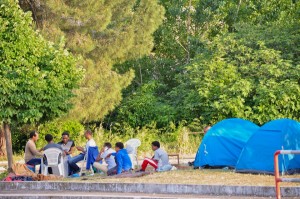 Rome, 20 June 2015 – Refugees do not choose to become refugees. They become refugees out of compulsion. They experience separation from loved ones, starvation, discrimination, fear, trauma, indefinite incarceration and worst of all, the demonization of their human dignity. They hope not only for survival, but for a peaceful and decent life, free from persecution and discrimination. Even when they eventually do make it to a safe refuge, it is very hard for them to restore their lives by themselves. During this time, their hope for education and equal opportunity often fades away.

My name is Antony Mukui*; I’m 28 years old and I come from Kenya. My story, though tragic, is sadly not unique.

I should say that compared to the millions of refugees across the world, my journey has been through God’s grace a fairly easy one.

It was the night of 5 November 2013, when my family and I were attacked in our home by a gang of about 12 men armed with crude weapons: machetes, axes, knifes, etc. I was outside of our house talking to my cousin Joseph inquiring why the electricity shut off. As we talked, this gang confronted us. They took me hostage and ordered my cousin to go back to sleep. Little did I know that was the last time I would see him alive.

I was led to the house and the ordeal began. All the while, they were looking for my mother, who was then an employee in one of Kenya’s security services. This ordeal lasted just about an hour, and at the end of it all I was injured terribly. My young sister, 12 at the time, had gone through an attempted rape; my 92 year old grandmother had been harassed and traumatized; and my friend and colleague Peter was seriously injured and had to spend two months in the hospital undergoing reconstructive surgery on his mouth.

As you can all imagine after such a traumatic event, we lived our lives in fear, sleeping in shifts at night. While the local police guarded our compound, we stood watch too. The investigations were going nowhere; and after four months of this, we made the decision as a family to leave the country that we had called home for all our lives into an uncertain future.

A new home. We arrived in Italy on 21 January 2014. Based on the recommendation of by the Kenyan Superior of the Jesuits and with permission of the Superior General of the Jesuits, Franciscan Cappuchin priests took us in their San Lorenzo di Brandisi college, where they usually house foreign students who are studying in Rome. We have been living with them ever since.

They have helped us not only by offering us a roof over our heads but also a place to heal our inner wounds by providing us with spiritual counseling and allowing us to be part of their family. We eat meals together, have discussions, play football and watch games together from time to time.

This transition has not been easy on my family, leaving everything behind: a good house, good jobs, a car, all our friends and family. The life of a refugee is not an easy one; there are many challenges that one has to go through including the lack of employment, housing and proper documentation.

Rebuilding through faith. Worse for me is the feeling of not belonging, of not being human. As a refugee, every day you cling on to the hope that the next day will be better than yesterday. This hope and our faith in God is what have kept our family together over the past year, despite all the difficult times that we have faced. It is the faith that as long as we have our lives, we can always rebuild and achieve greater things.

Every day, I am inspired by the stories of my fellow refugees that I meet from all over the world. Many of them are young men and women like myself who have undergone so much pain and suffering in their young lives, but who all have two things in common – hope and determination to make something of their lives despite all the challenges they face.

Ultimately, I must say the story of a refugee is a story of great courage. It is a story of a people who refuse to give up when everything around them seems to crumble, who chose to hope when it would be so easy to give up.

I challenge all of you to look at refugees as your fellow brothers and sisters, as human beings.

I believe that we can all do our part to help those who are suffering. As Pope Francis reminds us, we must all be able first to see, and then help others to see that migrants do not represent a problem to be solved. They are brothers and sisters who need help and should therefore be welcomed and loved.

Each one of us must answer the Holy Father’s call not only by helping to provide housing, food, employment and education, but more importantly to tackle the root causes that cause people to flee and find durable solutions to those problems.

Opposing the war in Vietnam, Martin Luther King Jr., said “a time comes when silence is betrayal.” That time I believe has come for us as far as the refugee crisis is concerned. The time has come for all of us to not only speak up, but to act. This I believe is our duty not only as Christians but as human beings, and in doing so, we will love our fellow man and “Push forward, not back.”

This piece first appeared on the JRS International website: http://en.jrs.net/index