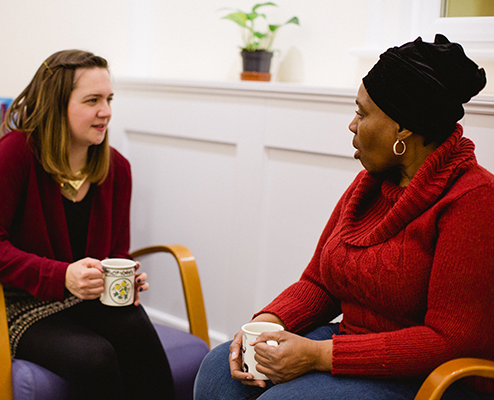 Theology Together: Refugees and Academics

Sophie Cartwright reflects on the process that informed Refugee Stories: Changing the Narrative 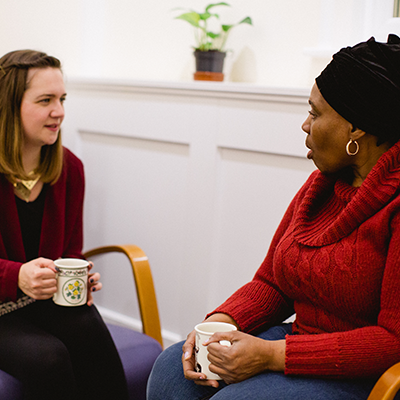 JRS UK is collaborating with Heythrop College – a Jesuit college for theology and philosophy – on an exciting new project, “Refugee Stories: changing the narrative”. This seeks to theologise about the asylum system in the UK with those who have experience of it. We wanted to work out a way of doing theology with refugees, rather than about refugees.

To do this, we held two sets of conversations between refugees, academics, and practitioners working with refugees, some of whom were also refugees themselves. The first was held at JRS’ office in Wapping – where we also host our weekly day centre – whilst the second conversation was held at Heythrop. So, this project brings together two distinct spheres from within the Catholic community: JRS, where we work directly to accompany, serve, and advocate for refugees, and Heythrop, which offers an academic space for deep theological and ethical reflection. We wanted to ground theology and ethical reflection in encounter between people with different skills and perspectives.

It was tricky to work out how to structure these conversations. It was paramount that the voices of refugees were heard, and so we needed to devote space and time for listening to refugees. As we thought more about what that might look like, we realised that, if that was all we did, there was a risk that theology would still be produced by academics about refugees. But we wanted to do more than ensure good raw data, for academics to fashion into theology. It was important to foster interaction between theologians and refugees, for ideas to be shared and critiqued. We decided that the first conversation would focus on listening to refugees, and the second would reflect theologically on the content of the first.

I admit that when we gathered in Wapping on a February morning for the first conversation, amidst what turned out to be an excess of pastries, I was a little nervous. This was new for JRS and for Heythrop. Would it work? Would everyone involved be okay? But I needn’t have worried. Several people told me they got a lot out of the conversation: academics, that it was humbling and eye-opening, if sometimes very challenging, to listen to refugees explain what their experiences of seeking asylum; refugees, that they were glad of the chance to discuss the asylum system seriously, and that they appreciated being listened to.

The second conversation at Heythrop included many of the same people, together with a few new faces. This allowed us to consider the issues from a range of angles, and also gave us diverse perspectives from which to reflect on the conversations as a whole. These conversations were a chance, first, to check that what theologians had heard was what refugees and practitioners had said and, second, for theologians to then share some ideas about what they’d heard from a theological perspective; these ideas could then be questioned, critiqued, and or affirmed.

Being privileged to take part in these conversations, I was struck by how they brought to the fore things about the asylum process its impact on human lives that often remain hidden; for example, how it dehumanises, how it is embedded in wider social attitudes. Some initial research from this project will be presented as part of a symposium at Heythrop College on 20th June. But this is just an early, experimental step in what we hope will be long-term practices of both collaborating with academic theology and empowering refugees to speak about their experiences.

Interested in attending the conference? Find out more information and purchase your tickets here

‘Refugee Stories: Changing the Narrative’ is one of many events happening this Refugee Week. Find out what else is happening and how you can get involved here