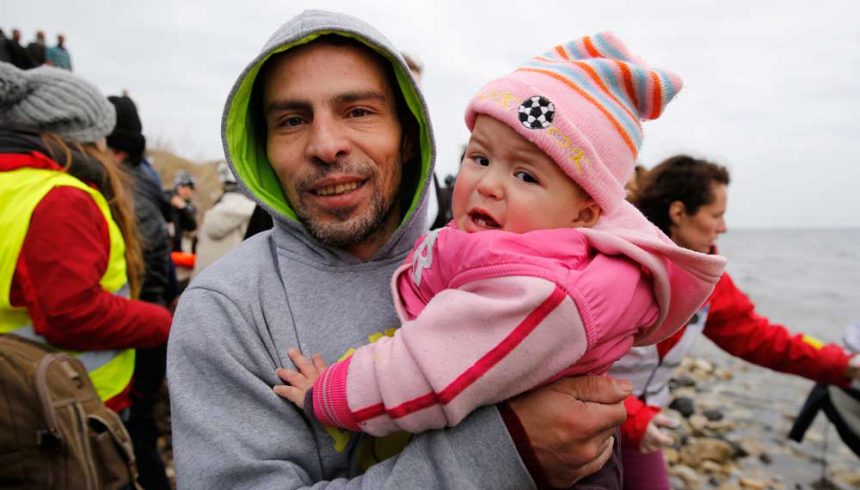 “There but for the grace of God…”

Brian, one of our volunteers, shares his experience of serving refugees in Lesvos 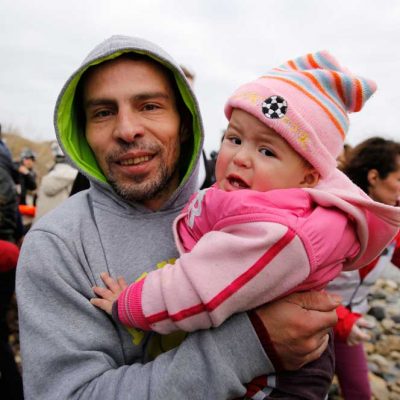 October 2015 – A luxury cruise to celebrate 40 years marriage, a once in a lifetime trip to the Holy Land combined with visits to cultural highlights of Cyprus, Turkey and Greece culminating in  a visit to Istanbul – Where East meets West.

My wife  and I  had walked in the footsteps of Jesus Christ in Jerusalem, Bethlehem, Nazareth, Capernaum  and Galilee, and  wading in the River Jordan had brought our baptism into clear focus.

Yet, on leaving Israel, our cruise ship zigzagged between the splendours of  Patmos, Paphos, Rhodes and Ephesus, allowing us to slip into a soporific routine of gourmet meals, accompanied by good company, fine wines and cocktails.

However, on leaving Dikili, a small nondescript Turkish coastal town the ship came to an abrupt halt in the narrowest part of the Aegean Sea. The Island of Lesvos in Greece , (where over half a million refugees landed during 2015),was clearly visible on our starboard side while we sailed parallel to the Turkish coast. The captain, and his crew  on the navigation deck, had spotted an inflatable craft, with a normal capacity of about 30 passengers but carrying scores of refugees; men, women and children,with the  belongings they managed to salvage from their former homes in rucksacks and plastic bin liners. The boat`s outboard motor had failed and due to the overcrowding it was in imminent danger of being consumed by the sea.

We had seen many similar boats in similar circumstances on television news. But this time it was different. This was real, the refugees were flesh and blood, their despair was apparent.

The reaction of my fellow holidaymakers was mixed. Many sympathised with the desperate travellers seeking refuge in Europe.

Others, mainly North Americans, expressed their concern that the boat people were possibly terrorists who should be sent back to Turkey.

The most upsetting reaction was that of the small number of cruisers who wanted photographs of the pitiable refugees for souvenirs.

Once the captain of our ship had received reassurance from the Greek Coastguards that the occupants of the inflatable were safe he gave the order to proceed to Istanbul. In the next hour a further five flimsy inflatables, each carrying up to a hundred refugees came into sight.

Needless to say, we dined and slept  in opulence that evening.

Arriving home a few days later it was difficult to erase the memories of the poor souls escaping the brutality of life in their homelands of Syria, Iraq, Iran, Afghanistan and Pakistan. It was ironic that I had spent the previous weeks celebrating my Christian faith in the Holy Land, reflecting on the birth, life, suffering and death of Jesus.

Now I was struggling to marry that faith with the experience of witnessing the suffering of those who like Jesus before them had fled their homeland to seek peace and refuge in a strange country.

The following Sunday, at Mass the Gospel Reading was pertinent : Mark 10; 35-45.

Jesus said “For the Son of Man himself came not to be served but to serve”,

In the homily our Parish Priest, Fr John Harvey, stated that if we professed to be Christians but did not serve others then we were in danger of being called hypocrites. I suddenly turned to my wife and whispered, “I`m going back to help”

The next fortnight was spent researching volunteering opportunities, arranging accommodation and flights to the island of Lesvos .

Friends and neighbours generously donated clothing and foil blankets which took up most of my luggage allowance, In addition they raised £1500 to enable me to purchase suitable goods in Lesvos thus helping the local economy.

On Lesvos a steady stream of refugees, who had made the treacherous 12 km journey across the Aegean sea from Turkey, land on the northern shore. They had often spent days hiding in the forest areas along the Turkish coast awaiting their  turn to board the inflatables made to accommodate  30 but often carrying 100 men, women and children, including babies, as well as all the belongings they were able to salvage from their former homes, sometimes in plastic bin liners.

It’s true that no one puts their children in a boat, unless the water is safer than the land…. and we all know how dangerous the water is.

It was  truly heart breaking to see..

Volunteers ensured that those that made it safely to dry land were given a warm welcome, wrapped in emergency foil blankets and given the opportunity to see a doctor asap after landing.  Often the “Captain” of the boats, with no previous experience, were refugees selected at gunpoint by the Turkish smugglers.  Hence boats were sometimes misdirected onto rocky beaches, punctured and sunk. Volunteers swam out to try to help bring everyone ashore safely.  In the panic some refugees, broke limbs.  In all cases they had to wade through water up to their waists to reach safety.  In the confusion shoes were often lost.

Many refugees told me of the fear that their overloaded boats, taking in copious amounts of water, would sink during the crossing.  Thus, belongings, including backpacks enclosing a lifetime of memories:  family photographs; letters; even passports are often thrown overboard and they arrive with only the clothes they are wearing. One group told me that one of the bundles jettisoned into the cold Aegean contained a young baby.

I joined a group of volunteers at OXY, a temporary camp set up in the car park of a nightclub.

At OXY volunteers welcomed refugees, provided them with food, dry clothing and somewhere to rest, often outdoors, while they awaited transport to the registration camps.

When they arrived in OXY the refugees were, mostly, relieved to have arrived safely. There was  an air of happiness, tinged with uncertainty about their future. It was with a heavy heart that we, the volunteers, knew what they still had to face in Moira or Kara Tepe, the registration camps in Mytilini, and even worse beyond while they took the Balkan route into Northern Europe. I found my niche in OXY – it was a great honour to act as a “welcomer” when the refugees arrived, sometimes by bus, often by car driven by private individuals or vans provided by other charity groups. Other groups of refugees would walk the 5 km. I had the task of keeping families together and ensuring order as they queued for tickets for food and transport. I was soon known as “One Line” as this was invariably my plea to the hundreds arriving every hour.

The grateful adults would thank me as they walked by, just because I was there, helping them.  I was stunned by the age range of those seeking refuge – from babies only days old to those of advanced age, sometimes in their 80s. I often imagined that some of the seniors could have been my own parents. Elderly men and women ravaged by age and infirmity now further ravaged by the rigours of the perilous journey.

At OXY there was the info/welcoming tent, a medical tent staffed by volunteer doctors and nurses, a food tent which issued cheese sandwiches, fruit, water and milk, and clothes tents which enabled the refugees to obtain dry clothing.

Tickets were issued for buses to take them to the registration camps. (Until OXY was established, the refugees would have undertaken this journey on mountainous roads by foot.)

Once fed, the refugees would be issued with blankets and encouraged to settle as they waited for their buses. On busy days we welcomed up to 6000 people so the wait was considerable – up to 2 or 3 days.  Fortunately the days were bright and warm but at night it was bitterly cold and if they were unable to find room in the big tent provided by UNHCR their only option was to sleep on the roadside. Hundreds/thousands huddled together for warmth under grey blankets. In the early morning they would rise ghost-like still wrapped in their grey shrouds.

Further food tickets were issued during the days and nights but the diet of cheese sandwiches was often unpopular as witnessed by the large number of cheese slices found amongst the litter. It was with great joy that this diet was enhanced by hot food that Islamic groups, often from various towns in England, delivered at night. The recipients were gracious and thanked us sincerely in any way they could – many offering to pay.

From early morning until late at night, buses provided by IRC transported the families or groups of friends to Mytilini and as they left the volunteers would start to clean the camp, often accompanied by groups of Syrians or Iranians.

And so the daily routine would continue –  working on Lesvos was an experience I could never have imagined.

My overall thoughts are:

“There but for the grace of God…

How would I cope in their situation? Would I bear myself with the dignity and forbearance exhibited by so many of the people whose lives impinged on mine in those  2 weeks?”

I left Lesvos with heavy heart knowing that many more desperate people will arrive on the beach in search of peace.