Volunteering at JRS, the Day-Centre 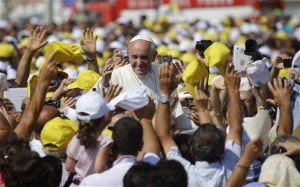 Mike Guilfoyle, talks about his experience as a JRS volunteer.

Following my departure from having completed a twenty year ‘ stretch ‘ working as a front -line Probation Officer in London in 2010. I started to look around for new and energising pathways into working outside the statutory sector and in particular fulfilling a long standing interest in working as a Volunteer. After experiencing some unexpected setbacks, I was informed by one well known charity having made what I took to be a convincing presentation, that I was unsuitable as I appeared to have not quite stepped outside the probation officer persona! Undeterred, I directed my attentions to an altogether different area of volunteering, that I had peripherally engaged with albeit in the context of casework supervision with ‘ foreign national’ prisoners when working as a probation officer.

Having already written articles for the Catholic Social Justice Quarterly, Justice Magazine, on how my catholic faith had informed my approach to working with those who came into contact with the criminal justice system, it seemed fitting that having contacted the Mount Street Jesuit Centre and had the estimable pleasure of an informal interview with Andrea Kelly that I was directed (I have now nearly completed my novitiate!) towards the Jesuit Refugee Service. At the time, JRS was relocating from its former base in North London to Wapping and as such I awaited with keen anticipation the much delayed meeting (due to the aforementioned migration across London) with JRS Assistant Director Jonathan Parr. The convivial and engaging process of volunteer recruitment was then wonderfully complemented by the presence of a warm, welcoming and eclectic staff group.
Although I had expressed a preference for working as a volunteer visiting those caught up in the Orwellian world of detention centres, childcare considerations meant that this option has remained , at least for the present, impracticable. Since then I have willingly given up a chunk of my Thursdays to work in the vibrant and challenging weekly Day-Centre that is at the heart of the Hurtado Centre and this has offered a richly uplifting experience which has meant so much to me, anchored as it is in the foundational principles of catholic social thought, respecting the dignity of the human person, who is possessed of a god -given worth captured so well in Matthew 25: ‘ If you welcome the stranger, you welcome me’

I was mildly amused to note that the Jesuits also have what they define as House Probation , that is novices perform most of their basic but essential tasks , alongside their heroically lengthy but to the secular outsider, formidable period of formation. I can honestly state that the time I have so far spent at JRS has been unremittingly rewarding and has offered me a privileged opportunity to meet with, work alongside and support the refugees, many of whom offer their greetings and friendship, when they arrive at the Day-Centre and prior to leaving. I now feel a warm attachment and measured respect for those friends whose stories of displacement and rejection, have resulted in unmerited penury reliant on the charitable support of JRS and other voluntary bodies. In making oneself available often at times of great individual distress, by opening up an emotional space and presence and active compassionate listening. I have always tried at moments when my patience or attention is lacking, to recall the enduring words of Holocaust survivor Elie Wiesel, ‘ If I see a person or persons suffer and the distance between us does not shrink, then my place, is not good, not enviable’.

Working at the JRS has helped me to see in the vulnerable stranger a mirror of myself, and a reflection of Christ that points towards an invitation to human solidarity. I have met some truly wonderful colleagues, some of whom have since moved onto other challenges and career openings. The ready wit, cheerful banter and ‘ salty’ humour in evidence when volunteers come together has been a source of joy and delight to me, the ‘ passagiato’ practised with consummate ease by one of the volunteers now studying for a higher degree! will no doubt be recognised by ‘front of house’ volunteers! An invitation to accord greater attention and support to those marginalised by political strife and persecution and broken by personal tragedy was recently reiterated in the Apostolic letter in anticipation of the World Day of Migrants and Refugees from Pope Francis which concludes with these resonant words: ‘Dear migrants and refugees! Never lose the hope that you too are facing a more secure future, that on your journey you will encounter an outstretched hand, and that you can experience fraternal solidarity and the warmth of friendship! To all of you, and to those who have devoted their lives and their efforts to helping you, I give the assurance of my prayers and I cordially impart my Apostolic Blessing.’
Subscribe to JRS-UK Community Blog by Email