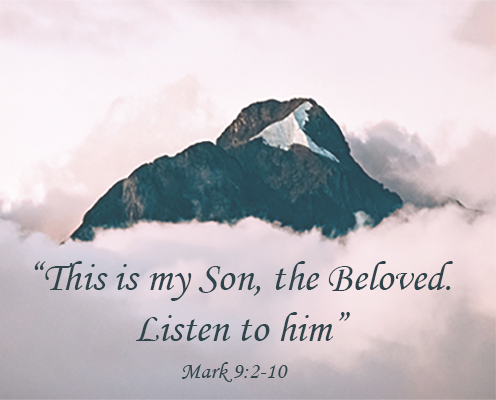 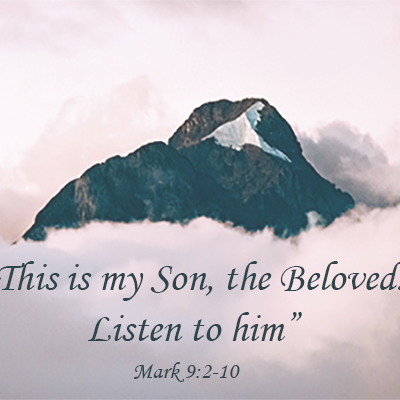 This week we introduced you to Koffi, one of our refugee friends who is accompanied by staff and volunteers at JRS UK and a guest of our At Home hosting scheme.

Having fled conflict in Western Africa, Koffi sought safety and welcome in the UK. However he was met with a hostile asylum system that left him without support. Even when faced with a complex bureaucracy that feels like “an endless process” Koffi remained hopeful, saying “I think God is faithful … God will always provide a place“.

By trusting his faith in God and relying on the generosity of charity, Koffi was able to find the welcome in his host communities that was absent from the immigration system.

Today as we reflect on the Sunday Mass readings  with one of the JRS volunteers we invite you to see God’s presence in the everyday.

Only their own, everyday, familiar friend

“there came a voice from the cloud, ‘This is my Son, the Beloved. Listen to him’”
Mark 9:2-10
In many ways today’s gospel is one of the most mysterious passages in scripture.  Jesus and three of his disciples, Peter James and John, go up a mountain.  In itself that’s nothing strange – God often preferred to appear on mountains, and Jesus seems to have preferred to pray there; it was probably a peaceful break from his work.  But for the disciples it was to turn out to be quite out of the ordinary.

They saw Jesus transformed – a shining bright figure, quite unlike anyone they had ever seen before.  And with him were two of the greatest figures from the Bible – Moses, to whom God originally entrusted the revelation of God’s own self, and what it would mean to be a faithful disciple of The Lord God; and Elijah, the great prophet and miracle-worker, who was swept up to heaven in a fiery chariot, and was widely believed to be about to return.  And Jesus was there, talking to them as to equals.  Stranger still, a voice apparently from within a cloud (which often signifies the presence of God) identified Jesus as his Son.

It’s perhaps not too hard to imagine what the disciples understood of all this – probably not very much.  It’s much more interesting to speculate what Jesus, who was human just like all of us, made of this incident.  Maybe we will find out one day.

But the most remarkable part of this story comes right at the end, when Moses and Elijah had departed.  The three disciples looked around and, it tells us, ‘saw no one with them any more  but only Jesus’.  Only their own, everyday, familiar friend.  “It’s OK”, they might have said, “it’s only Jesus”.

Until this moment, they probably had no idea that Jesus was any more than an inspiring, caring friend.  They knew him as someone who cared for those who were suffering, who went out of his way to bring healing to sick people, to extend to all the hand of God’s friendship.  And despite the amazing appearance of Jesus in his glory they still saw him as that deeply compassionate friend to all who needed him.

In the Jesuit Refugee Service, we call everyone – staff, volunteers, homeless and destitute refugees and asylum seekers – friends.  Peter, James and John glimpsed Jesus as being in some way a deeply special person, but knew him as a familiar everyday friend.  May we all be compassionate, everyday familiar friends to those who need our care.

JRS UK are grateful to Koffi for sharing his story. Please do not reproduce without permission.