Thursday of the 2nd week of Lent, 1st March 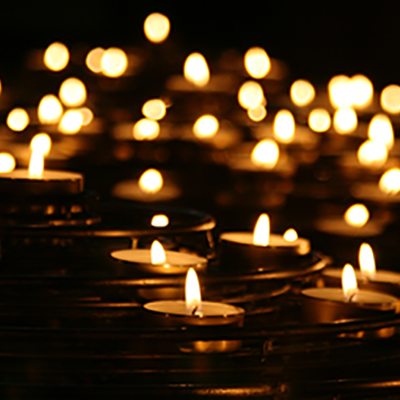 “No one lights a lamp to put it under a tub; put it on the lamp-stand where it shines for everyone in the house.”
Matthew 5:13-16

Throughout Lent, we invite you to listen to the stories of refugees accompanied by JRS. Where do we see the Lord’s light encouraging us on our journey?

Therese has a very deep and powerful faith. In a time when others would have fallen into a state of hopelessness or despair, Therese’s faith in God helped her to keep her head above water. “If I did not put my trust in God and prayed I don’t know how I would go through. I kept my faith going and kept praying.”

Even when talking about the stress of being detained indefinitely and the disdain for the process she endured, Therese was still able to find joy through her faith. “At the moment I am going through a hard time but I say ‘God, you see me through this situation’. As the storm gets stronger, you sometimes just have to laugh. It is better to have joy than to have sorrow.”

“I trusted in God’s own timing. What he starts, he finishes.”
Join us tomorrow where we will rejoin Therese on her journey.

Therese’s story is real, however, we have changed her name to protect her privacy.

Today we invite you to sit with the mass readings and join Sr. Linda, one of our detention outreach volunteers, in a space of prayer and reflection:

Alex (not his real name) had been detained for almost two months when I encountered him in Heathrow IRC. He suffered a lot of trauma and isolation in his own country and was moving from one place to another. Fleeing was the only resolution for him. He was in great distress and somehow his ill condition developed into severe depression.

One night, he phoned me and told me that he could not sleep and was hearing voices to kill himself. I was feeling helpless on what to do at that time but I found myself telling him these words, ‘I will light a candle for you now and know that I am with you, praying and holding your hand.’ After several nights, he met me again in the Welfare office and was smiling to me saying these words, “Thank you so much. Your kind words have uplifted me. God is so good!”  I could see his inner disposition was changing and became sober each time I visited him. Alex was released after six months of being held in detention.

A glimpse of light is all that matters in times of darkness. Light is something we hope for when things inside are dimmed. Alex needed ‘light’ in those times and maybe even after he was released from detention. We are all bearers of light. I believed Alex has also lighted a candle for me when I was feeling helpless to deal with his situation. God has gifted us the ‘light’ we both need. That Light became our source of courage and hope to move our small steps forward.

‘Blessed are you who bear the light in unbearable times, who testify to its endurance amid unendurable, who bear witness to its persistence when everything seems in shadow and grief.’

JRS UK are grateful to Therese for sharing her story with us. Please do not reproduce without permission.