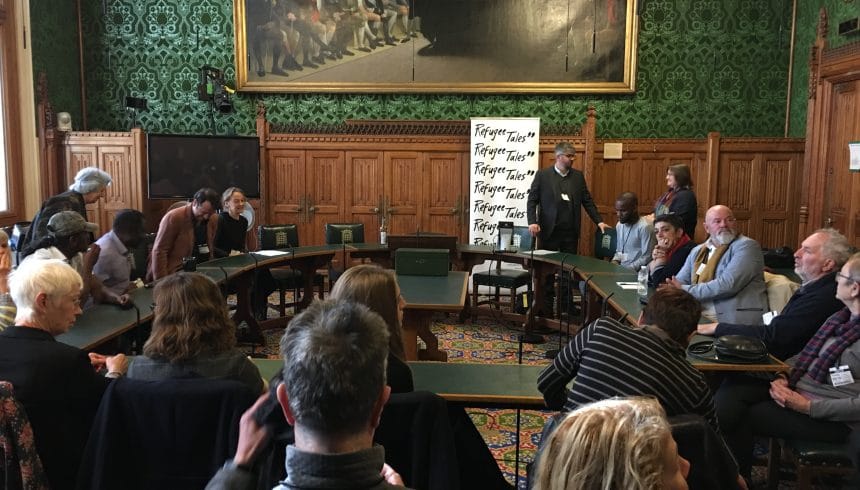 Writers, actors and supporters attend the parliamentary finale of 28 Tales for 28 Days 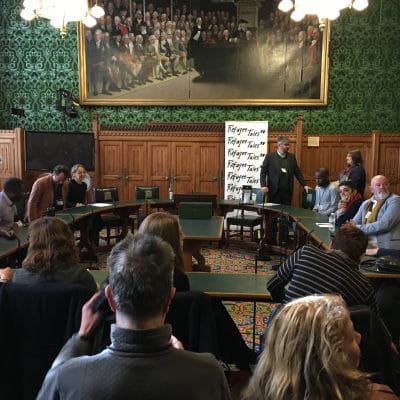 Yesterday, Refugees Tales held the finale of their ’28 Tales for 28 Days’ campaign in parliament. Attended by some of the actors and writers who had read the tales during the campaign, the event saw the release of Refugee Tale’s film of 28 statements supporting an end to indefinite detention; reasserting the campaign’s call for an immediate end to indefinite detention with the introduction of a 28-day time limit.

Actors and authors join together to read a statement on indefinite detention from Refugee Tales.

Afzal Khan MP, the shadow immigration minister who hosted the event, spoke of the need for reform within the detention estate and confirmed the Labour party’s commitment to introduce a 28-day limit on immigration detention. He was joined by Paul Sweeney, MP for Glasgow North East, who passionately spoke of a number of cases he heard in his constituency of individuals affected by the hostile environment. He spoke of two young boys who had been threatened with deportation before the community had come to their support, of how he had invited them to parliament but the fear of being deported meant they would not make the journey to London. Mr Sweeney also spoke of the case of a Vietnamese man who had been trafficked to the UK illegally to work in a cannabis farm and subsequently imprisoned and then detained despite being a victim of trafficking and modern slavery; a story similar to those JRS UK often hears when visiting detention centres at Heathrow. Speaking of the hostile environment and the wider impact of indefinite detention on communities, Paul Sweeney said, “It is a vindictive way that this system is managed.”

There was standing room only by the time Niamh Cusack came to read The Detainee’s Tale, written by Ali Smith. An incredibly emotive tale that tells the story of one man brought to the UK, forced into a number of terrible situations on the way, only to be subjected to further trauma in detention. This was followed by some background into the work of Refugee Tales by David Herd, lecturer and coordinator of Refugee Tales, before an expert by experience shared his tale of leaving his home country, reaching the UK and being detained in Brook House 3 times, saying “I cannot close my eyes, I just think about detention”.

William Neal, Communications Assistant at JRS UK, attended the event saying, “It was an incredibly powerful, moving and motivating event. It is very hard the hear The Detainees Tale and not feel overcome with a need for justice, no matter how many times you read it. For Afzal Kahn and Paul Sweeney to be at the event and show their commitment to ending indefinite detention shows that progress is being made and that the campaign won’t stop until we see the introduction of a time limit with the intention to end detention.”

JRS UK supports a number of men who are currently detained at the two Immigration Removal Centres at Heathrow by organising social visits during their time in detention. If you would like to learn more about our work in detention get in touch.

Find out more about the work of Refugee Tales