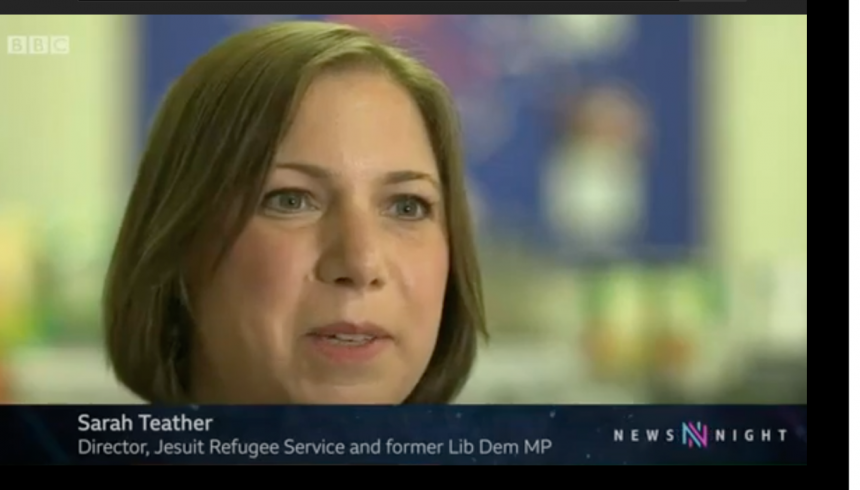 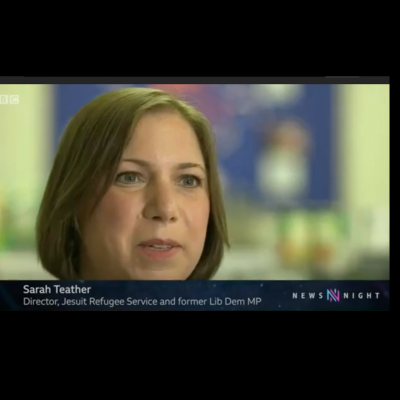 Last Friday 3rd July, BBC Newsnight interviewed Sarah Teather, director of the Jesuit Refugee Service in a special report on homelessness after the coronavirus pandemic. The report showed some of the work being done at the our centre in Wapping, which includes delivery of emergency food and toiletry packages to destitute refugees around London. BBC Newsnight journalist Richard Watson also spoke with one of JRS UK’s destitute refugee friends, who is temporarily housed in hotel accommodation.

If you missed Newsnight last Friday why not catch up and watch the report on BBC iPlayer? Go to 26mins 20 secs to watch the special report.

Restrictions on access to public funds have enforced destitution among those without immigration status, and have left others subject to them, extremely vulnerable to destitution. The risk of destitution has increased during the coronavirus pandemic, as has the danger of it.

On 26th March, central government announced the ‘Everyone In’ scheme. Local Authorities began moving rough sleepers into emergency accommodation such as hotels. This included many people without recourse to public funds, including many of those seeking asylum who are accompanied by JRS UK. However, now that lockdown is beginning to ease, those accommodated in hotels have begun to receive eviction notices.

Speaking to BBC Newsnight from the JRS UK centre in Wapping, Sarah Teather said: ‘The all-in policy was a hugely positive step, we had a moment where everybody came together and it seemed as if everybody mattered’

‘I want to see the no recourse to public funds restrictions lifted at this stage. It is the only way in which we can make sure that individuals are safe and that wider public health is protected’

A government taskforce has been set up to lead the next phase of the response to homelessness, and to continue to support rough-sleepers. However, it is unclear how far this new phase will include people without recourse to public funds, and particularly those without immigration status. At JRS UK, we are hearing from many of our refugee friends who are anxious as their living arrangements come to an end, and they will face street homeless once again.

Cardinal Vincent Nichols, Archbishop of Westminster spoke to BBC Newsnight about this upcoming homelessness crisis, and urged the innate dignity of those suffering is not forgotten.

He said: ‘In these circumstances when you know there’s a downpour, you can’t just simply push people out.’

Speaking of those living without secure immigration status, he continued:

‘At this point we should be prepared to put all those things to one side and deal with the person in front of us. This is a human being whose life is full of trauma, they are here, we need to respond to that humanity in front of us recognising the innate dignity of each person, and not simply consign them in to an abyss’

Or you can watch the special report on Youtube