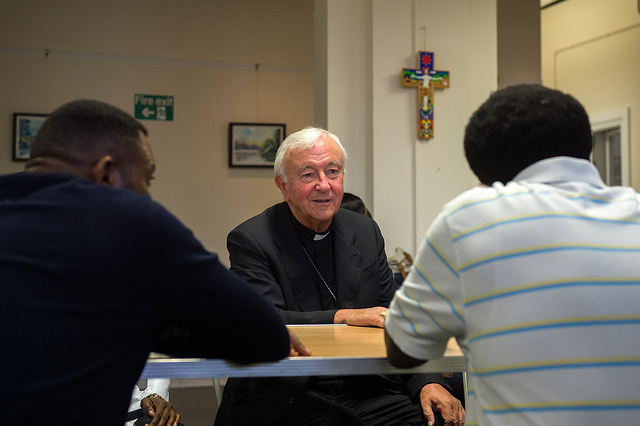 On a visit to JRS, Cardinal Nichols calls treatment of asylum seekers a "shame on our country" 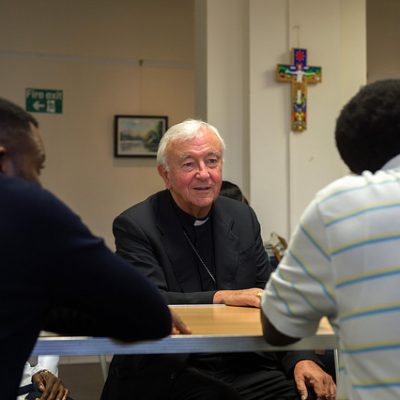 On a visit to the Jesuit Refugee Service (JRS), Cardinal Vincent Nichols, the Archbishop of Westminster, told BBC Radio 4’s Sunday programme that the UK government’s treatment of asylum seekers was “a shame on our country”. After spending time listening to the stories of those accompanied by the Jesuit Refugee Service UK, who are struggling to gain recognition of their refugee status, he said “If you’re here for 10 years and you can’t have a residence, you can’t study, you can’t work, you have no income, its as if you are being told you are a ‘nonperson’, and its that darkness that we have listened to this afternoon. I can think of no other word than to say it is a shame on our country.”

Visiting the weekly Day Centre run by JRS UK for destitute asylum seekers and refugees, the Cardinal had the opportunity to meet individuals who find themselves the victims of the hostile environment agenda. The Cardinal was visibly moved by the stories he heard, saying, “I heard heart-rending, terrible stories of the way some people have been treated … we…have a system in place that obviously has to deal with some very difficult cases, some hard cases, but it seems to deal with all cases in a very hard manner. And it can’t be right… that a person is left in this limbo, this no-man’s land, for 10 or more years, in a country as sophisticated and as affluent as ours.”

JRS UK has long been drawing attention to the damaging effects that the hostile environment agenda has on those seeking sanctuary. Many asylum seekers served by JRS UK are forced into a prolonged limbo of destitution by the Home Office as they struggle to gain recognition of their status as a refugee. During his visit to the JRS Day Centre, the Cardinal met with people currently trying to navigate the complexities of the asylum process, including hearing directly from three women who shared the difficulty of their lives. One spoke of her experience of being detained and two others of the ongoing pain of destitution and rejection at the hands of the asylum system.

Speaking on the “twilight world” described to him by the people he met, the Cardinal said “ … what we’ve heard this afternoon is how deep that darkness is. And in a way how deliberately that darkness is created, in a deeply mistaken sense that treating people this badly will prevent others seeking sanctuary in this country.” 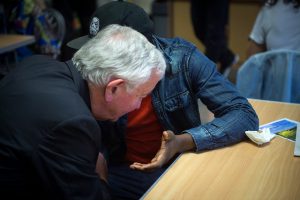 Cardinal Nichols listens to the stories of those seeking asylum in the UK (© Mazur/catholicnews.org.uk)

This week the Home Secretary announced a temporary ‘pausing’ of data sharing between government departments for the purpose of immigration control. It has been widely reported that in light of the government halting their practices of sharing an individual’s data that the hostile environment has been ‘suspended’, however legislation that prevents those without documentation to rent properties, to access the job market and benefits and restricts access to free healthcare are still in place.

Director of JRS UK, Sarah Teather said: “A temporary suspension of data sharing is not a pause on the hostile environment agenda and does not come close to the root and branch reform needed in the immigration system.”

“The suffering caused by the hostile environment is deliberate and purposeful; these policies are directed to make the lives of those struggling to gain recognition of their refugee status as crushingly difficult as possible. This deliberate and cruel imposition of hardship is not an acceptable way to treat any human being, let alone those seeking sanctuary.

“The asylum seekers we support through our Day Centre have often struggled with destitution and homelessness for many years. Resilient people are made vulnerable by the system itself.

“The government needs to stick to its word and provide the substantive change in culture needed within our immigration system. It is time to end the hostile environment agenda altogether.”