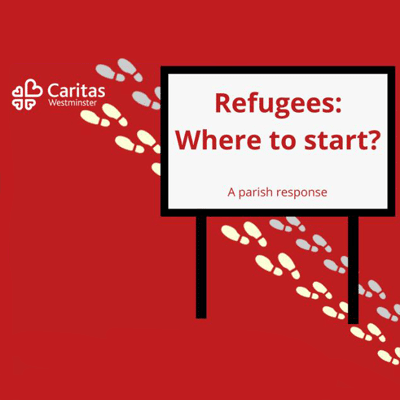 Last Thursday, JRS UK attended ‘A Parish Response to Refugees: Where to start?’, an evening hosted by Caritas Westminster that brought together representatives from parishes and communities across the diocese and different organisations working with refugees and migrants. Nicholas Hanrahan, Community Outreach Officer at JRS UK, had been invited as one of the evening’s speakers and to particpate in a ‘speed dating’ excercise where the organisations present rotated around five groups sharing a bit about their work. The event was an opportunity for individuals and parishes who wished to help refugees and those seeking asylum to engage with organisations working in the area and learn more about the concrete actions they could take to get involved.

At the beginning of the evening, Bishop Paul McAleenan, the Bishop for Refugees and Migrants of the Catholic Bishop’s Conference of England and Wales, led a short prayer and spoke about different areas that he had experienced in his role that revealed the scale of injustice and uncertainty refugees faced in the UK. He shared words of encouragement that Pope Francis has shared during a recent meeting he had with him in Rome. John Coleby, Director of Caritas Westminster, then shared some of the key values present in the Church’s teaching that talk of how refugees ought to be treated.

During the ‘speed dating’ style exercise, organisations were rotated around five groups of participants. At each station the speakers were able to speak for a short time about their organisation’s work and the various ways in which people could support that work. Participants were able to more personally engage with how they, and their communities, could support and get involved with the different ways of supporting refugees in their area.

The speakers then formed a panel to discuss some of the issues that had be raised during the evening. This allowed some interesting thoughts to be raised, including some of the challenges involved in attempting to react to the great need and how these could be overcome. The evening ended in a time of prayer for refugees and the organisations that journey alongside them.

Of the evening, Nicholas said: “This was an enjoyable and encouraging evening that allowed those who wish to take action to reach out to their brothers and sisters in need. The attendance was very good, showing that there are many willing to get involved in the important work of welcoming those who all to often are shown hostility.”

Interested in finding out more about how you can support refugees and the work of JRS UK? Get in touch!