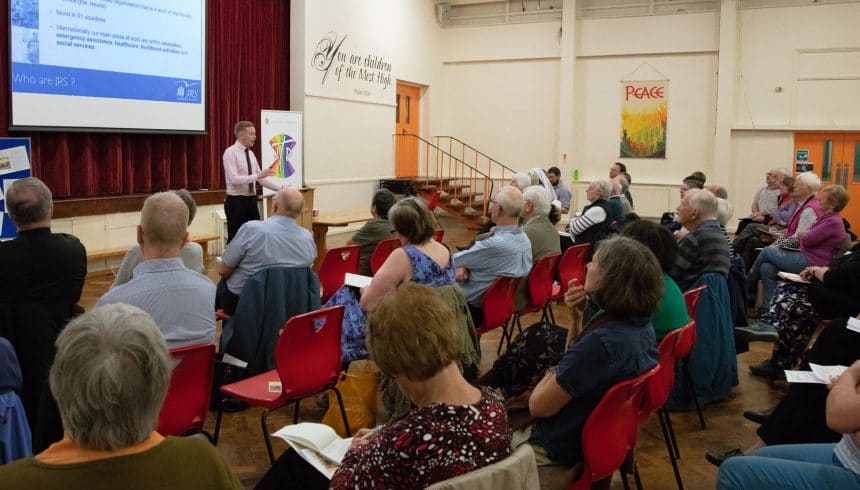 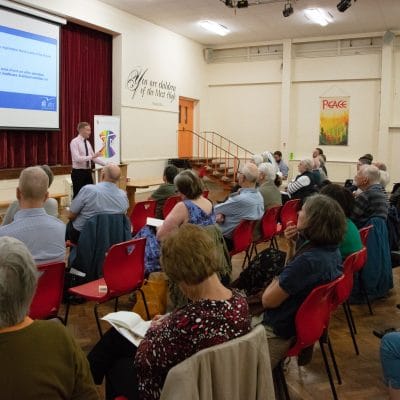 On Saturday 13th October, Nicholas Hanrahan represented JRS UK at the annual Birmingham Justice & Peace Assembly taking place at St Peter’s RC High School in Solihull. The day saw people from the Justice & Peace movement in the Archdiocese of Birmingham gather together and discuss the topic of migration, based upon the theme: ‘I was a stranger and you welcomed me’ (Matthew 25:35).

The day began with prayer and a short reflection led by Bishop William Kenney, Auxiliary Bishop of Birmingham, who reflected on his experiences of work with refugees who were forcibly displaced due to conflict in South Sudan.

Nick Hanrahan shared about the work of JRS UK, focusing on the devastating impact of the hostile environment on the refugees we accompany and serve. He went onto speak about accompaniment, a key part of JRS’s mission, and how by journeying alongside our refugee friends we provide welcome and friendship that can begin to overcome the hostility faced elsewhere.

Of the day, Nick said: “I was delighted to represent JRS UK at the Birmingham Justice & Peace Assembly. The day was an opportunity for all present to reflect on the estrangement that people seeking refuge in our country are subjected to and what steps we can take to welcome in light of the Gospel.”

The day’s second guest speaker was David Newell, Project Manager at Brushstrokes. David talked to attendees about some of the realities and facts about migration and asylum in UK, but with a particular focus on the local context in Birmingham. This allowed people to focus on the different ways and practical actions they could take to support refugees and migrants in their local communities.

The assembly then split into small groups to discuss issues that arose in the talks. Several other organisations, including CAFOD and the Columbans were also present, led workshops in the afternoon that expanded the focus to other topics surrounding migration. There was then a discussion panel featuring the day’s speakers with many questions from the floor asking how the hostile environment could be challenged.

The day closed with a time of prayer for migrants and refugees and those who accompany them, particularly calling on the intercession of Oscar Romero, who was canonised the following day.

Nicholas Hanrahan, “It was especially moving to spend a time reflecting on the life of St Oscar Romero, whose life was devoted to supporting those who had been marginalised by their society. I would like to thank all responsible for organising the day and all who gave their time to share openly in important discussion about how to respond to the needs of refugees and migrants.”

Want to find out more about the work of JRS UK and how you could support refugees and those seeking asylum? Get in touch and invite a member of JRS UK to come and speak at your parish, school or community.