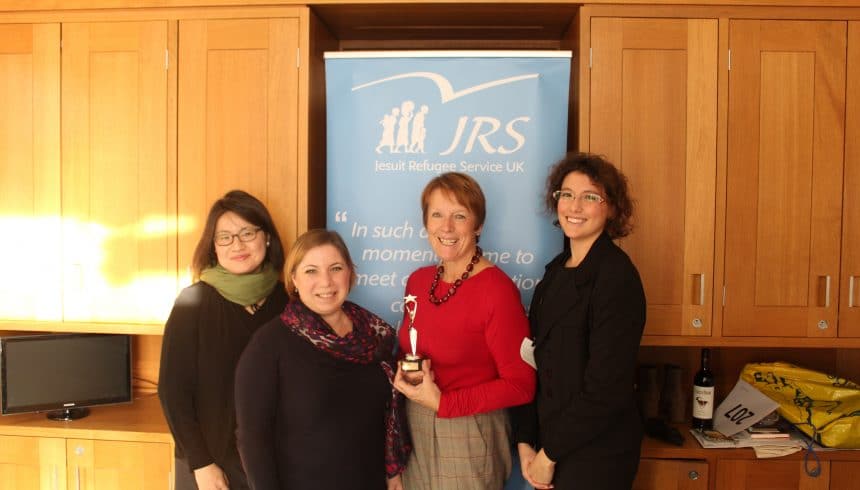 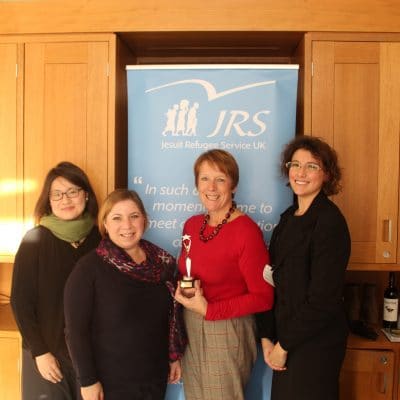 Yesterday JRS UK presented Rt Hon Dame Caroline Spelman, Conservative MP for the Meriden constituency, with The Detention Forum Champion Award on behalf of The Detention Forum. This award was a small token of recognition for her sustained efforts to seek reform within the immigration detention estate. Dame Caroline participated in the Cross Party Parliamentary Inquiry into Immigration Detention in 2015 and has for some time been a vocal supporter for an end to indefinite detention and a greater use of alternatives to detention. Upon receiving the award, Dame Caroline said: “It was a huge honour to be presented with the Detention Forum Champion award by JRS UK today. All too often refugees and asylum seekers are unnecessarily held in immigration detention centres for far too long. The very least we can do is speak up for those whose own voices cannot be heard.”

The Detention Forum Champion Award given to Dame Caroline yesterday is one of a number being awarded by The Detention Forum to recognise the parliamentarians who have spoken out on the need for detention reform. Through her work to champion the cause of those held in immigration detention, Dame Caroline is raising the voice of the voiceless; ensuring that politicians remain aware of the need for an end to indefinite detention.

Sarah Teather, Director of JRS UK who presented the award, said “We were very proud to present Caroline with The Detention Forum Champion award for her ongoing work to bring reform to our current detention system. We hope that this award will provide a visible reminder of our appreciation for her efforts and of the hope she is giving to those in detention.”

Sarah added, “What really stood out for us yesterday in our conversation with Caroline was her deep humanity.  We were moved when she chose to dedicate her award to a constituent who had struggled for many years to resolve their asylum case. She had clearly been changed by accompanying her constituent through those difficult years and it had given her an insight that she has carried through into her work in Parliament.”

The presentation also allowed JRS UK to share with Dame Caroline more about JRS UK’s work, including the work of the detention outreach team, which organises social visits to provide emotional and pastoral support for those detained in the Immigration Removal Centres at Heathrow. Reading from a letter delivered alongside the award, Beatrice Grasso, Detention Outreach Manager at JRS UK, recounted some of the encounters she has had visiting those detained in Colnbrook and Harmondsworth saying “I will never forget a man in Colnbrook telling me that he felt that the difference between the UK and his home country was that over there he had been tortured physically, but over here he was being tortured mentally through detention.”

Dame Caroline Spelman finished by saying, “I would also like to take this opportunity to commend JRS UK for the excellent work they do in supporting refugees and forced migrants who find themselves in the UK.”