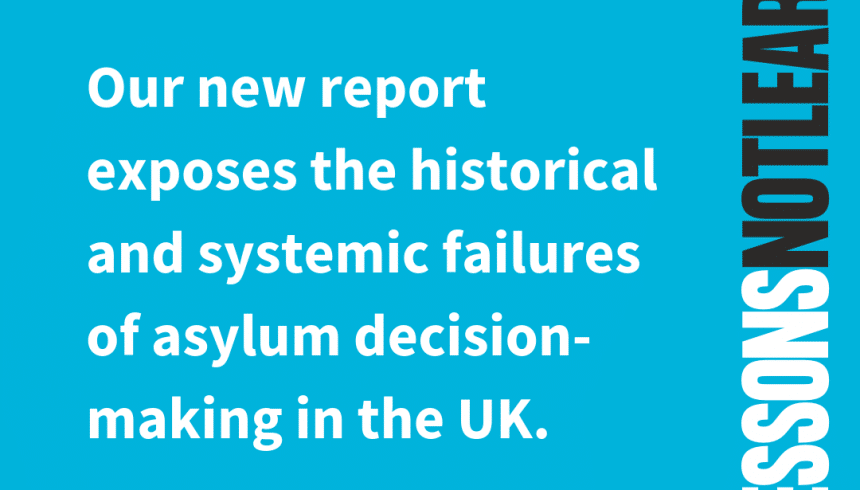 Join our call for a protection based asylum system 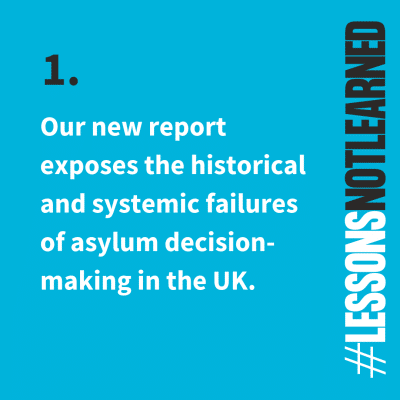 A new report Lessons not Learned published today documents 15 years of flawed Home Office decision-making arising from an “unrealistic and unlawful evidential burden placed on applicants and a starting point of disbelief”. The report notes that this has “a devastating impact on the individuals involved” and calls for the government and Home Office to urgently put protection at the core of the asylum system.

Lessons not Learned examines wide ranging case studies from over 50 reports and finds that an unduly high evidential burden and culture of disbelief result in refusals across different kinds of asylum claims and issues involved in those claims including evidence of torture, LGBTQI+ identity, and religious affiliation. Case studies include an example of medical evidence of torture being rejected because the doctor who corroborated it was not personally a witness to the torture, and of children’s claims being rejected on the grounds that they could not name the precise position their parents had held in a given organisation. It notes that, routinely, a large number of Home Office refusals are overturned when asylum claimants appeal to the courts.

Sarah Teather, Director of JRS UK, said: “Every day at JRS UK we meet people who have had crushing experiences of the asylum process. Many will describe how they have faced a wall of disbelief from the Home Office, which appears to take no account of their experience. Worse, once rejected, asylum seekers become subject to the hostile environment and face years of destitution, homelessness and may cycle in and out of detention. Asylum seekers we accompany often say that they feel their best years have been stolen from them by the asylum process.

“There have been many reports over the years detailing failures of the current asylum system, which have similar findings and made overlapping recommendations about the need for future change. This report aims to bring these together. The Home Office must not continue to ignore these reports and sensible recommendations for improvement. Reform is not beyond its grasp to deliver – it simply requires political will.”

Sophie Cartwright, JRS UK’s Policy Officer, said: “This report is further damning evidence of an asylum system that treats people seeking sanctuary with deep suspicion rather than offering badly needed protection. At JRS UK, we see the horrifying consequences of this; some of those we work with struggle through the system for years before it is finally acknowledged that they are refugees, and have been all along. Deep, systemic change is badly needed.”

The report is a collaboration led by the charity Freedom from Torture with contributions and endorsements from JRS UK, Helen Bamber, The Joint Council for the Welfare of Immigrations, Refugee Action, Refugee Council, and the UK Lesbian and Gay Immigration Group.

In addition to evidencing system disbelief and flawed credibility assessment among Home Office decision-makers, the report writers note that high quality legal aid is necessary to enable people who are erroneously refused asylum to successfully challenge that refusal. In 2018, 38% of appeals of asylum refusal were allowed, according to Home Office statistics. In 2017, it was 35%, and in 2016 41%.

JRS UK is joining with Freedom from Torture and our partners to write an open letter to the Home Secretary, Priti Patel MP, asking that she adopt the recommendations in our ‘Lessons Not Learned’ report.

Add your name to the open letter.