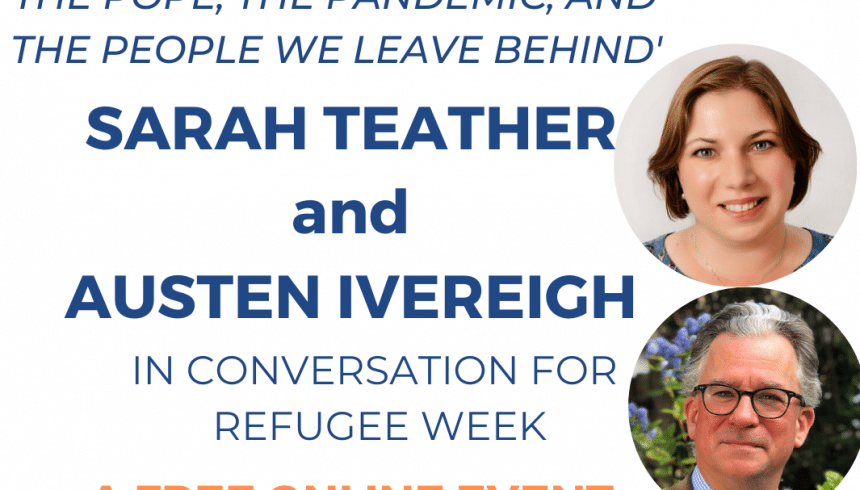 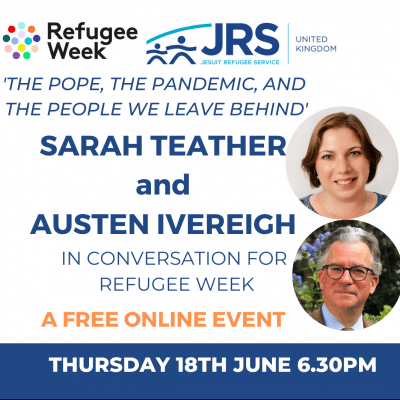 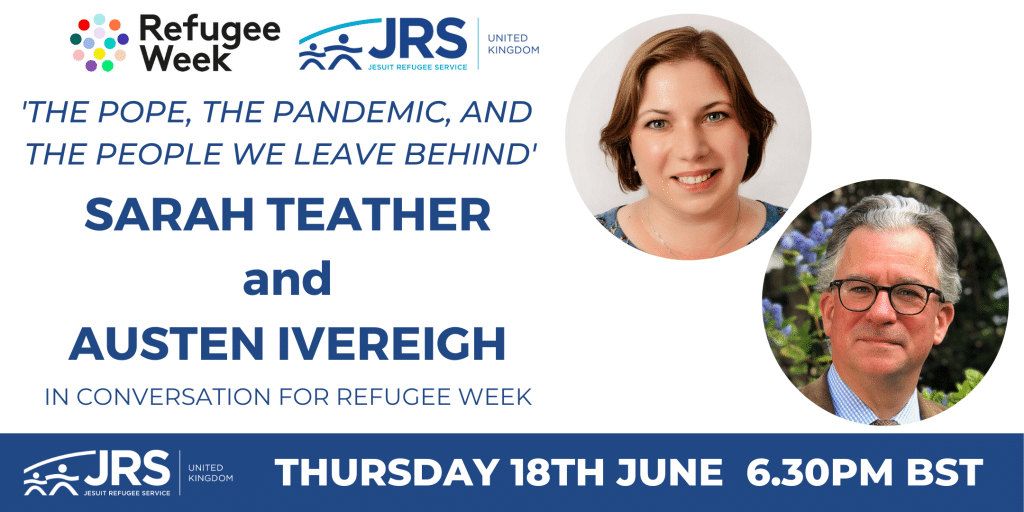 Join Sarah Teather, Director of the Jesuit Refugee Service UK and Pope Francis biographer and journalist, Austen Ivereigh, for a special refugee week conversation, reflecting on the issues COVID has thrown up for the Church and its care for the most marginalised. What can we learn from Francis’ leadership about how the Church should respond? How is the Church responding on the ground to the issues facing refugees and migrants during the pandemic? What lessons can we learn from both as we re-imagine the future?

This online event is an opportunity to listen to both speakers reflect on these questions and more, and hear from some of the refugee friends accompanied by JRS UK as they share their own reflections and experiences of seeking asylum in the UK.

Come together with us, across borders and distance, to celebrate our interconnectedness, stand with refugees and imagine a different world.

This event takes place alongside several other activities hosted by JRS UK to celebrate refugee week, including a digital anthology of writing from JRS refugee friends, volunteers and staff, and a digital photography and art exhibition.

Austen Ivereigh is a British Catholic writer, journalist and commentator best known for his bestselling authoritative biography, The Great Reformer: Francis and the making of a radical pope (Henry Holt/Picador, 2014/2015) and a new book on the pontificate, Wounded Shepherd: Pope Francis and his struggle to convert the Catholic Church (New York: Henry Holt, 2019). As public affairs adviser to the late Cardinal Cormac Murphy-O’Connor he helped organize the first Mass for Migrants at Westminster Cathedral in 2006 and later turned the cardinal’s call for regularization of undocumented migrants into a Citizens UK campaign, ’Strangers into Citizens’. He is Fellow in Contemporary Church History at the Jesuit-run Campion Hall, University of Oxford. He writes regularly for Commonweal, America magazine and The Tablet, and is a well-known commentator on the BBC. He recently moved with his wife Linda to a small farm near Hereford, close to the Welsh border, where he can be found when not traveling. He tweets as @austeni.

Sarah Teather is director of the Jesuit Refugee Service UK, based in Wapping in East London. Sarah was formerly a Liberal Democrat Member of Parliament representing the London constituency of Brent Central from 2003 to 2015. She served as Minister of State for Children and Families for the coalition government from 2010 to 2012. She was also chairperson of the All-Party Parliamentary Group on Refugees, which helped prepare her for her present role, a position she has held since December 2015.

Refugee Week (15- 21 June) is a UK-wide festival celebrating the contributions, creativity and resilience of refugees. Through a programme of arts, cultural and educational events alongside media and creative campaigns, Refugee Week brings about positive encounters between communities, helping them to connect and learn from each other, and promoting a culture of welcome. This year’s Refugee Week is the first to be held virtually, and we are invited to explore the theme of ‘Imagine’.

In the era of Covid-19, the call to imagine feels more important than ever. ‘To imagine’ means to picture something you can’t currently see. To step beyond the current moment, and perceive something different. Rather than being a flight away from reality, imagination is sometimes the best response to it – the only way to get us somewhere new.

Join us for this special virtual event, and take part in a big, creative, collective movement to imagine a better world.

If you would like to attend this free online event, please register using your email address here