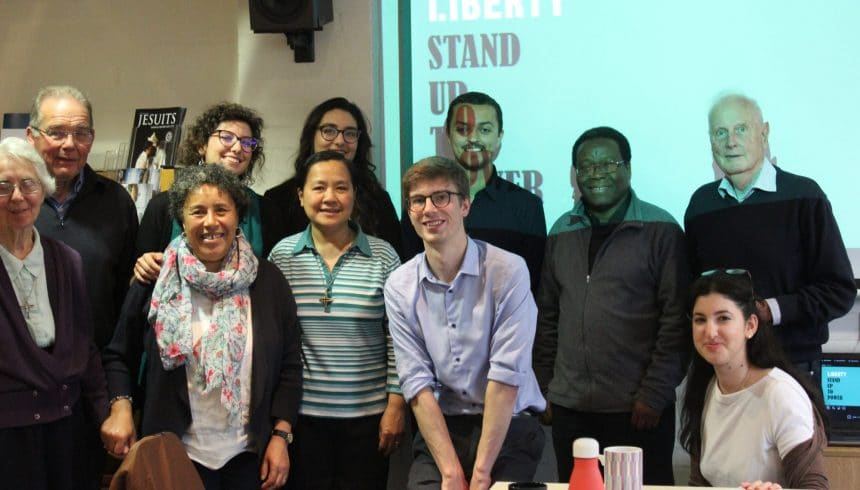 Stand up to Power

On Wednesday 19th June, during Refugee Week, JRS UK welcomed Donnchadh Greene from LIBERTY; a human rights organisation that challenges injustice, defends freedom and empowers individuals to protect their rights, to present to the Detention Team at their monthly detention outreach meeting here in Wapping.

JRS advocates for dignity and justice to be afforded to our refugee friends, who are our brothers and sisters, and active human agents. Donnchadh spoke about Liberty’s work in supporting those in detention to file complaints and stand up, when their human rights have been breached.

Donnchadh explained to the Detention Outreach Team what the procedure for making complaints is, what type of complaints can be made, and how we can support individuals at Harmondsworth and Colnbrook IRCs in filing their complaints to the Prisons and Probation Ombudsman.

Rhiannon Croker, JRS’s Communications Assistant said: “The presentation at JRS UK from Liberty’s Donnchadh was incredibly informative for all members of staff and volunteers who attended, and gave a good, practical insight into their complaints procedure within detention centres. I found the statistics provided by Liberty to be shocking – ‘In Harmondsworth of the 143 complaints received in 2016-2017, only 18 were substantiated’ – revealing just how flawed the complaints system in detention really is.”

Often, those in detention do not wish to file a complaint due to poor mental health, lack of faith in the system and fears of removal. Yet they are unaware that under detention rules, individuals cannot be punished for making a complaint; it does not interfere with their ongoing immigration case.

To make your voice heard in supporting a 28-day time limit on immigration detention, contact your MP here.

Statistics shared by Liberty revealed how people in detention are not only locked away physically, but also emotionally. Information shared during the training spoke of the presence of vermin, showers not functioning in entire blocks, websites being blocked, and the use of unnecessary restraint during removal processes and medical appointments — all of which are oppressive to individual liberty.

JRS UK visits the two detention centres at Heathrow each week, offering pastoral support to the people held in the combined 1,052 bed facility. We encounter people as unique individuals who have the right to expect a certain standard of care. Liberty advocates that IRCs are ‘put to proof’, and that when complaints, which inherently lack documented evidence, are filed against them, those suspected are held to account, unless they can prove good practice and compliance with the rules.

JRS UK accompanies individuals held in immigration detention near Heathrow airport. You can accompany those we visit in detention through our monthly prayer resource.