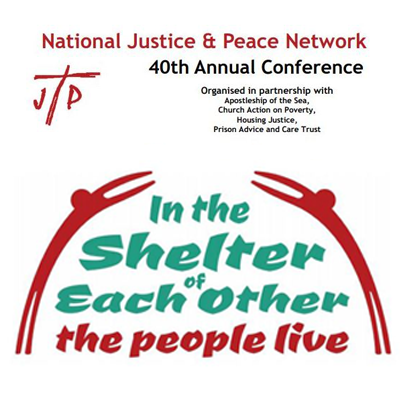 “We often meet God in these encounters with refugees”, says JRS UK Director

People are transformed by an encounter which is true and “opens your mind” says Sarah Teather, Director of JRS UK. Speaking at the annual conference for the National Justice and Peace Network of England and Wales (NJPN), Sarah shared how even in the face of difficulty and isolation created by the Hostile Environment Agenda, the generosity we receive from refugees is like a “primal urge that you wish to be able to give yourself back to others.”

Addressing the theme of the annual gathering, ‘In The Shelter of Each Other, The People Live’, Sarah spoke of the context in which the Jesuit Refugee Service (JRS) works in the UK. Working with individuals who are detained or find themselves destitute due to the asylum system, JRS UK aims to accompany those who are the deliberate targets of the Hostile Environment. Through a number of government policies that prevent asylum seekers from working, renting properties, and make it increasingly difficult to access healthcare, individuals are not only finding themselves forced in to destitution but also struggling to find a way out. “This is cruelty that is meted out in a deliberate way. It is cruelty that is a tool of government policy. And it is done with a purpose to try and get people to give up their claim for shelter, to give up their claim for protection. This shadow which is cast on people with such force is to force people to move out of what would otherwise be shelter”

Particular moved by the generosity that we encounter at JRS UK both from volunteers and the refugees with which we work, Sarah explained a conversation she had with a group of religious who volunteer as part of our hosting project. By welcoming refugees into their community, by providing them with shelter, “they felt that they had been given a new ministry, a new calling from God, to be able to welcome a refugee into their home. And what a transformation it had been for them to be able to be alongside someone in that way”.

And it is these encounters which enable people to truly open themselves to the difficulties and generosities of refugees. Speaking of the recent visit of Cardinal Nichols to the JRS Day Centre, Sarah shared that it was the time he spent sitting and listening to some of our refugee friends that had profoundly moved him. Sarah continued that through encounters like these “you realise that there is something there that you haven’t seen before; it opens your mind. It opens your mind to see a different way of the world.”

Drawing further into these encounters, Sarah proposed that they are much more than simple having the opportunity to understand a different perspective but rather there is something much greater at work, saying “I also have a real sense of that we often meet God in these encounters with refugees … When you draw into the shadow, and you draw alongside people, sometimes that’s where you see God’s protection of others, that’s where for us we get to see and meet the Living God working, labouring ahead of us.”

Concluding her talk, Sarah finished with the powerful words of Pope Francis: “For in every one of our brothers and sisters, especially the least, the most vulnerable, the defenceless and those in need, God’s very image is found.”

If you would like to support the work of JRS UK  to accompany, serve and advocate on behalf of refugees then please donate here