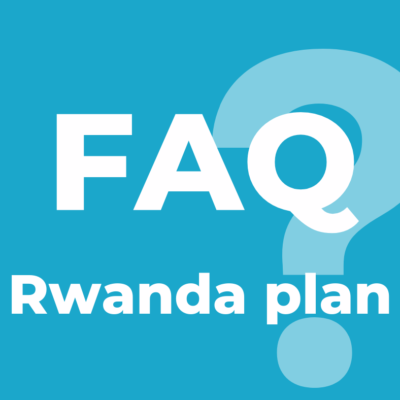 Sophie Cartwright, JRS UK Policy Officer, tries to answer some of the most frequently asked questions about the UK Government’s plan to send asylum seekers to Rwanda for processing (and ultimately reseetlement).

What is the plan?

To forcibly send some people who seek asylum in the UK to Rwanda, under a new Migration and Economic Development Partnership between the UK and Rwandan governments. As part of the plan, the Rwandan government will then have responsibility for their asylum claims. It will process their claims and, crucially, if they are recognised as refugees, they will stay in Rwanda. This is not exactly offshore processing.

When will asylum seekers first be sent to Rwanda?

The government have announced that the first ‘relocation’ flight to Rwanda will take place on 14th June 2022, and we are aware of people receiving removal directions for this flight. Removals are likely to face legal challenges, so it is likely that not everyone who currently has removal directions for the flight will ultimately go on it. We do not yet know how frequently subsequent flights will be scheduled.

What are the criteria for sending refugees to Rwanda?

Who is being sent to Rwanda on 14th June?

Among those who have been told they are on the flight are people from Syria, Iraq and Syria. This list is non-exhaustive.

Why is the UK government doing this?

It says that part of its aim is to stop people making dangerous journeys to the UK, but it has not produced any evidence that this will work. On the other hand, fear of being sent to Rwanda may drive people seeking sanctuary here underground, leaving them extremely vulnerable.

Is it safe to send asylum seekers to Rwanda?

Out-of-country processing has resulted in severe human rights abuses in the rare other contexts where it has been attempted. Australia’s offshore detention regime on Nauru and Manus Islands, in Papua New Guinea, meant years of human suffering. Twelve people have died since the policy began in 2013. Men, women, and children have suffered inhumane treatment and medical neglect, and years of indefinite detention led to self-harm, widespread suicidal ideation, and suicide. We have no reason to expect this will turn out better.

Additionally, Rwanda itself has recently been criticised by the thinktank Human Rights Watch for rounding up and detaining LGBT people and street children. The Rwandan authorities regularly prosecute journalists, political opponents, and commentators based on their speech and opinions.

Contact your MP now to express opposition to the Nationality and Borders Bill Act, and also raise concerns about the plan to send people seeking asylum to Rwanda.